.
In my neighborhood there's this coffee shop called CommuniTea. (Ugh I know, right? Make the needless abuse of puns end!) Anyway it's a hot-spot for filming things - they filmed a bunch of Gossip Girl there and it was the location they used for Greg Kinnear's health-food shop in Baby Mama. All that has nothing to do with anything except for the fact that I think of CommuniTea every time I hear anyone mention Joel McHale's new sitcom - starting tonight! - called Community, thankfully pun-free. 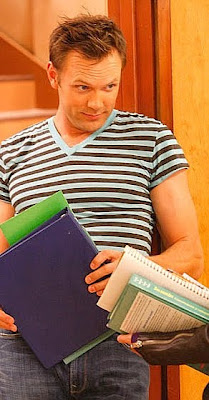 And hey look, bringing this to my point, PopWrap chatted with Mr. McHale about his show and The Soup and his role in Steven Soderbergh's The Informant! and all kinds of junk since Joel's so deservedly popular these days! Choice bit with regards to Community:

PopWrap: It's great and I think you'll have even more fans sweating you after that scene where you swap shirts with Abed.

Joel: [laughs] There you go!

PW: Seriously, we asked Twitter fans to submit questions for you and 99 percent of them were either "Can I have his baby?" or "will he go to Vermont and marry me?"

Joel: That's awesome! I always get asked about my gay following. I always say that A) I didn't know they were following me and B) it's fabulous.

First off, I was one of those people on the Twitter, although my request was more of the "drug him and throw him in a sack for me" variety. And I stand by it! And secondly, Joel, saying the word "fabulous" in reference to the gays is trying way too hard. Awww I love you anyway, Joel. You can call me fabulous... in bed! Oh I am positively naughty.
.
Who? Jason Adams When? 2:42 PM

I think he is simply delicious, funny, smart, and soooo many other things that's too naughty to say......