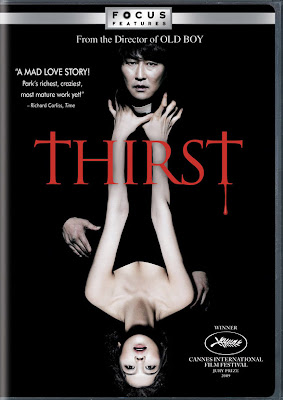 ... that's quick: STYD has word on the DVD release of Park Chan-wook's vamp-priest movie Thirst; it'll be out on November 17th. So if you missed it in theaters - and I have no idea, was its release that wide outside of large metropolitan areas? - your opportunity to watch the wacky antics of Father San-hyeon and his lady streaking red across austere white rooms is not too far off now!

I never did write a proper review of the film, or my mixed thoughts upon it, and I still don't think I can really. It's a complicated and messy film, perhaps my least favorite of Park's films but I adore all of his films so that isn't exactly saying that it's awful. Just that I had more issues with it than the others. It has moments of greatness but also stretches where I wasn't entirely sure that Park knew what he was going for himself. But it fascinates me and I might end up watching it more than his other films at the same time.
.
Who? Jason Adams When? 11:47 AM

Yeah, overall it didn't work for me. It was awful purdy to look at, and it had its moments, but overall it felt really disjointed and too long. A bit like 3 separate movies stitched together.

I thought THIRST was terrific. I enjoyed it even more than OLDBOY. I felt that both were a bit long, but I think that is due - at least in part - to having to deal with subtitles and thought-provoking subject matter at the same time. I wonder what they're like for a Korean speaker who wouldn't have to deal with the subtitles. I say "See it" on DVD if you haven't already, and "See it again" if you have.