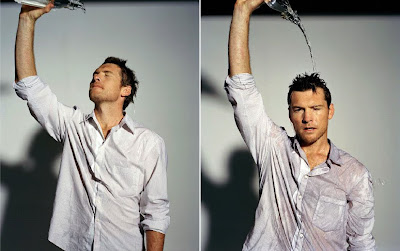 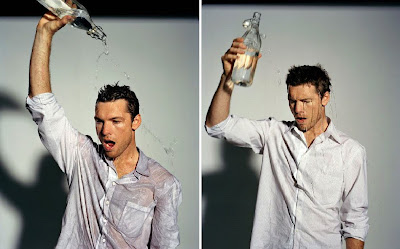 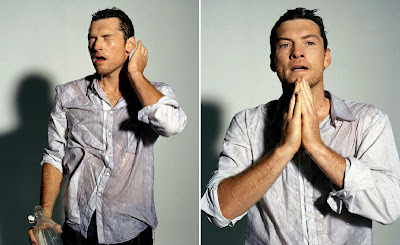 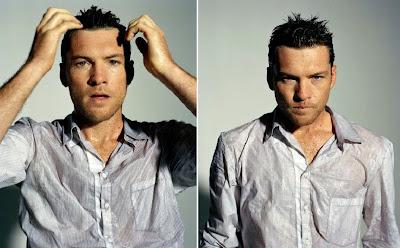 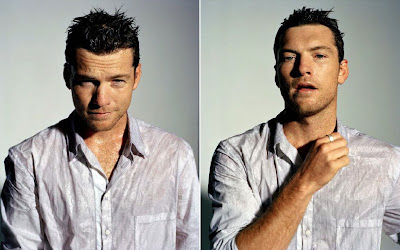 What is it about a fully-dressed man doused with water that makes my heartbeat pitter-patter ever faster? I just spent a good amount of time looking through photo-shoots of Sam Worthington and while there were several I appreciated... 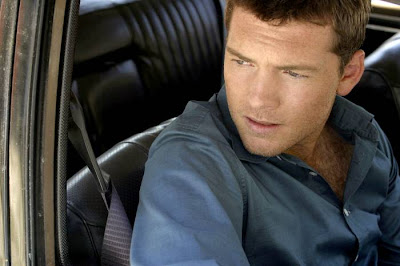 ... mmmm furry....
... I knew as soon as I came upon the water-bottle-pouring set that these were ones I needed to share. And from there it reminded me of this shoot of Jake of this shoot of Dom Cooper and how they're amongst my faves too and it makes me curious. It's presumably the simple answer, that the water looks like sweat and thinking of them sweaty makes you think of them making with the sex. But still. It's peculiar, in its own way, no? If some dude in the real world came up to me dripping with sweat like a sieve I probably wouldn't be turned on; I would kindly ask them to wipe themselves up a bit. But then I guess there's the factor of odor in the real world. Anyway who am I kidding, if Sam or Jake or Dominic Cooper came up to me reeking of sweat and filth I would still jump on them like gangbusters anyway. Gangbusters!!!

This has been your Friday dose of utter nonsense.
Hope you enjoyed! 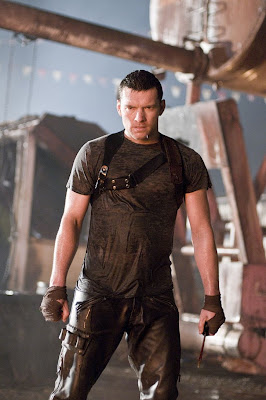 Seriously though this dive into Sam Worthington staring was inspired by a real something and not only lustiness: specifically this article at io9 asking if the DVD release of McG's Terminator Salvation might actually contain a good version of the film now that it's been revealed that it's his R-rated cut getting released onto disc and not the PG-13 version that was released in theaters. As far as I'm concerned there were way, way too many problems with what I saw to ever be fixed by adding some boobs and violence back in. But the promise of boobs seems to be peaking some fanboys' interest, naturally, which reminded me what a cheat we got with regards to Sam Worthington's time-travel shenanigans - not one nudie shot! I think he was sort of naked when he crawled outta that muddy pit but he was covered in mud so who knows? This was what actually sent me to Sam Worthington's fan-site where I fund the above photo-shoot - looking to see if there were pictures online of this not-naked naked moment to see what the deal was. But they didn't have any pictures from it yet. Anyway, that was a total rip-off - at the very least the film owed us a throwback to the time-traveling nakedness the series has always partook in. Shame, McG! Shame.
.
Who? Jason Adams When? 2:15 PM

I think it's some type of thong he's wearing when he comes out of the mud; what a gyp.
You always have fantastic pictures!

He is so goddamn sexy it's insane.