.
Why is it that in a full weekend of movie-watching, skipping between the obscure and the blockbusters, I can only seem to write up my thoughts on the more obscure ones that I see? I find myself confronted with this today when thinking about what to write on District 9. I didn't have much of a problem brewing up some brief thoughts on a three-year old Hungarian puke-fetish flick I paid 12 bucks to watch in somebody's run-down attic of a movie-theater, but the #1 movie at the box office this past weekend, the one y'all might have something to share in the comments over, well I go blank thinking up a proper review there. 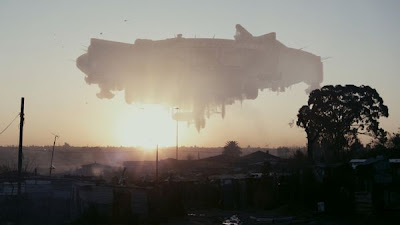 I'll share this: There was a moment, about a little over halfway through Neil Blomkamp's sci-fi apartheid feel-bad romp, that I realized I had no idea where the film was going, that I didn't have a clue what Blomkamp was gonna do. And that moment was absolutely thrilling. That the film ended up in a place not wholly surprising in retrospect is something to contemplate afterward, but during, in the actual thrill of the moment, that was something to cherish; a feeling not enough big Summer movies accomplish. That feeling that the director whose hands you're in really has upended the rule-book and shaken out all of the genre conventions; that anything can happen. Ultimately the film does slide into what-you-expect, but Blomkamp takes a new route to get us there and it was enthralling. 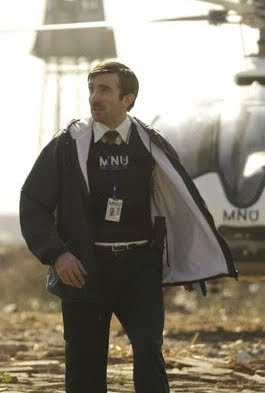 So it's a bit of a compromise. I don't think the film is the epic reevaluation of science-fiction storytelling like some people have hailed it to be. But I do think it's a solid and smart sci-fi action flick that's honest to its characters and is gifted with a tremendously appealing central performance by the outta-nowhere Sharlto Copley.

And yes, its appreciated, the whole "How we treat The Other" theme-mongering that Blomkamp's swamps the film in; it's always nice for a flick to have more on its mind than just the kiss-kiss-bang-bang (but oh what bang-bang!). But this is hardly the first movie to play the "illegal alien" card - where were the Men In Black? - and a 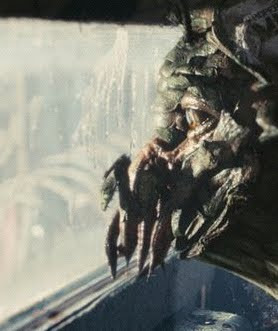 subtle play of that card isn't in Blomkamp's hand. But it worked. Mostly. Things moved at such an exciting and tense pace with new exciting visions of people-exploding spectacle that even when it was hammering its point a little too on-the-head it didn't much matter because you were wrapped up in it all the same. When the buzz wears off you see the seams. But it's an outfit you won't mind strapping on again anyway.
.
Who? Jason Adams When? 11:51 AM

I enjoyed this movie much more than I thought I would based on the reviews I read before seeing it. I especially enjoyed Copley's performance and I thought the special effects were terrific for only costing $30million.

I guess I must've avoided enough of the reviews to have gone into the movie not needing it to live up to game-changing reinvention-of-the-genre (or "Avatarian") standards. I'm glad I didn't realize those were the expectations going in. Because it's not. But it IS a rather perfect little summer action movie, and not in the way that people who defend "Transformers" mean it. This is the higher standard summer movies should be striving for -- some kind of a story to hold on to, a sprinkling of ideas to actually think about, a compelling character or two, and then heaps and heaps of exhilaratingly awesome action spectacle. Not perfect -- all your criticisms are on point -- but if you're not looking for perfection it hits the spot.

I was skeptical of the hosannas I'd seen beforehand so I wasn't let down, really. It pretty much hit squarely where I expected it to. I really did enjoy it.