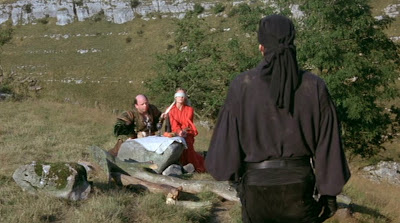 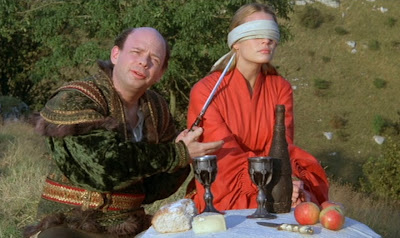 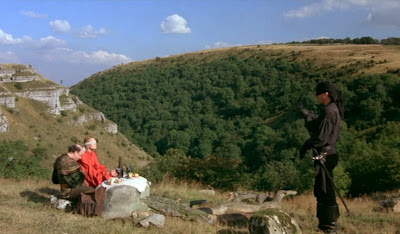 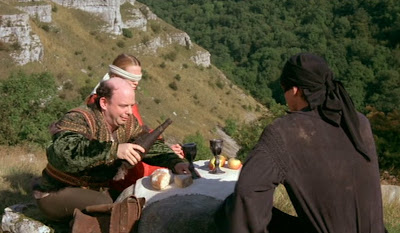 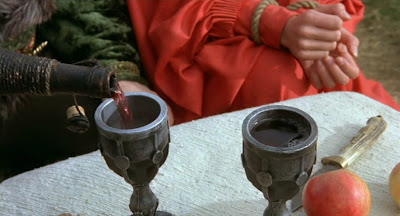 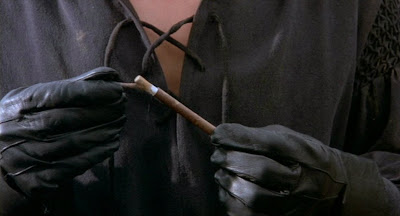 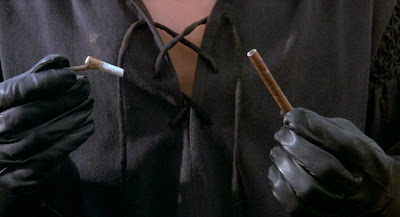 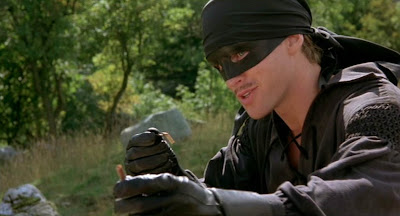 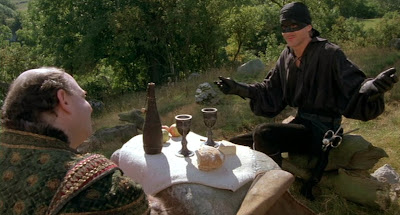 Man in Black: All right. Where is the poison? The battle of wits has begun. It ends when you decide and we both drink, and find out who is right... and who is dead. 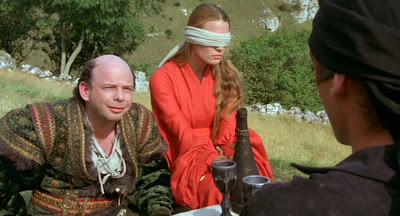 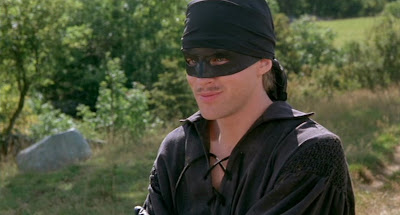 Man in Black: You've made your decision then?
Vizzini: Not remotely. Because iocane comes from Australia, as everyone knows, and Australia is entirely peopled with criminals, and criminals are used to having people not trust them, as you are not trusted by me, so I can clearly not choose the wine in front of you.

Man in Black: Truly, you have a dizzying intellect. 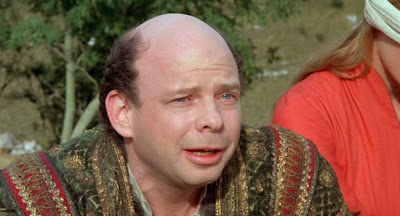 Vizzini: Wait til I get going! Now, where was I? 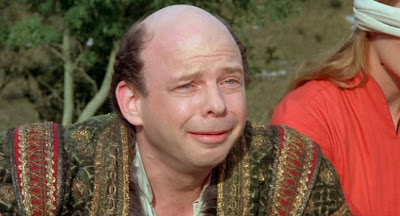 Vizzini: Yes, Australia. And you must have suspected I would have known the powder's origin, so I can clearly not choose the wine in front of me. 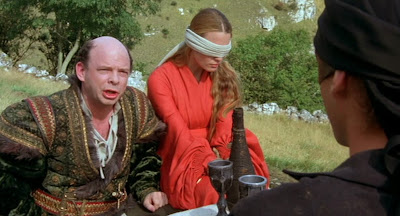 Man in Black: You're trying to trick me
into giving away something. It won't work.
Vizzini: It has worked! You've given everything away!
I know where the poison is!
Man in Black: Then make your choice.
Vizzini: I will, and I choose... what in the world can that be? 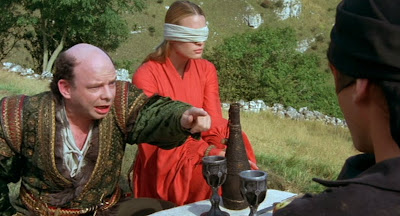 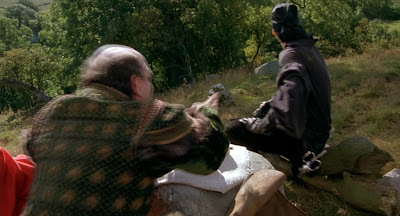 Man in Black: What? Where? I don't see anything. 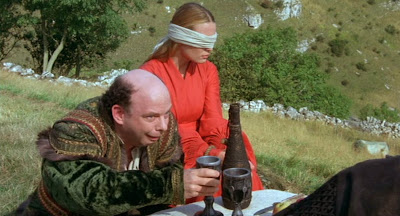 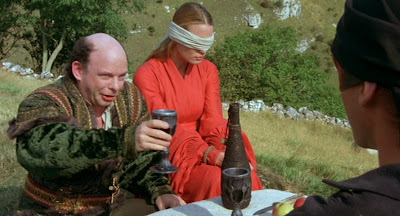 Vizzini: Well, I- I could have sworn I saw something. No matter. First, let's drink. Me from my glass, and you from yours. 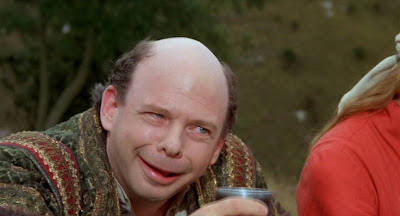 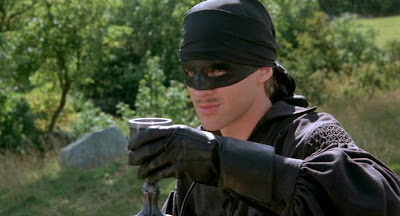 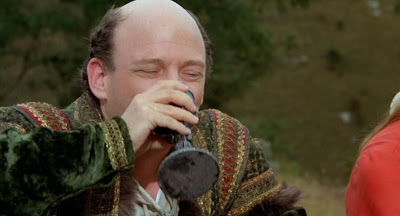 Man in Black: You guessed wrong.
Vizzini: You only think I guessed wrong! That's what's so funny! I switched glasses when your back was turned! Ha ha! You fool! You fell victim to one of the classic blunders! The most famous is never get involved in a land war in Asia, but only slightly less well-known is this: never go in against a Sicilian when death is on the line! 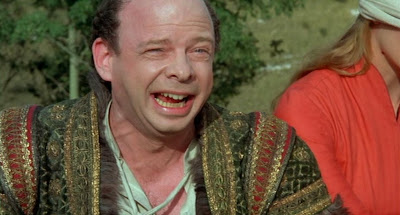 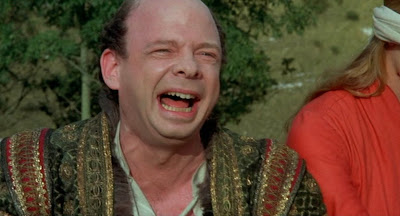 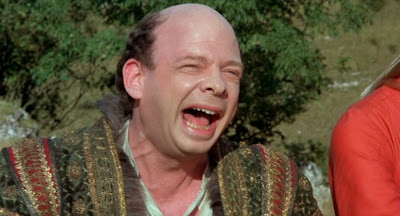 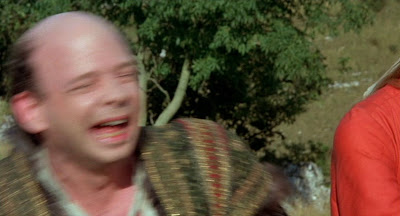 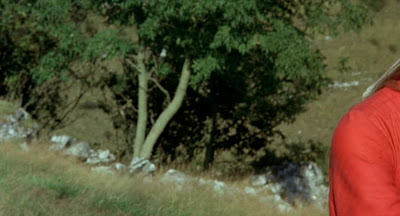 --------------------------------------
Previous Ways Not To Die: The Five Point Palm Exploding Heart Technique -- Nipple Injected Blue Junk -- Your Pick Of The Deadly Six -- Thing Hungry -- Don't Fuck With The Serial Killer's Daughter -- DO Forget To Add The Fabric Softener -- Any Of The Ways Depicted In This Masterpiece Of Lost Cinema -- Rode Down In The Friscalating Dusklight -- Good Morning, Sunshine! -- Mornin' Cuppa Drano -- The Cylon-Engineered Apocalypse -- Tender-Eye-zed -- Martian Atmospheric Asphyxiation -- Maimed By A Mystical Person-Cat -- The Sheets Are Not To Be Trusted -- Handicapable Face-Hacked -- I Did It For You, Faramir -- Summertime In The Park... Of A Pedophile's Mind -- A Vengeful Elevator God: Part 3 -- Strung Up With Festive Holiday Bulbs By Santa Claus Himself -- A Vengeful Elevator God: Part 2 -- A Vengeful Elevator God: Part 1 -- Decapitated Plucked Broiled & Sliced -- Head On A Stick! -- A Trip To The Ol' Wood-Chipper -- Pointed By The T-1000 -- Sucking Face With Freddy Krueger -- A Pen-Full Of Home-Brewed Speed to The Eye -- Motivational Speech, Interrupted -- A Freak Ephemera Storm -- When Ya Gotta Go... Ya Gotta Go -- Hoisted By Your Own Hand Grenade -- Having The Years Suction-Cupped Away -- Criss-Cross -- Turned Into A Person-Cocoon By The Touch Of A Little Girl's Mirror Doppleganger -- Satisfying Society's "Pop Princess" Blood-Lust -- Done In By The Doggie Door -- Tuned Out -- Taking the 107th Step -- Rescuing Gretchen -- Incinerated By Lousy Dialogue -- Starred & Striped Forever -- Vivisection Via Vaginally-Minded Barbed-Wire -- Chompers (Down There) -- Run Down By M. Night Shyamalan -- Everything Up To And Including The Kitchen Toaster -- Sacrificed To Kali -- Via The Gargantuan Venom Of The Black Mamba Snake -- Turned Into An Evil Robot -- The Out-Of-Nowhere Careening Vehicle Splat -- "Oh My God... It's Dip!!!" -- Critter Balled -- Stuff'd -- A Hot-Air Balloon Ride... Straight To Hell!!! -- Puppy Betrayal -- High-Heeled By A Girlfriend Impersonator -- Flip-Top Beheaded -- Because I'm Too Goddamned Beautiful To Live -- By Choosing... Poorly... -- Fried Alive Due To Baby Ingenuity -- A Good Old-Fashioned Tentacle Smothering -- Eepa! Eepa! -- Gremlins Ate My Stairlift -- An Icicle Thru The Eye -- Face Carved Off By Ghost Doctor After Lesbian Tryst With Zombie Women -- Electrocuted By Fallen Power-Lines -- A Mouthful Of Flare -- Taken By The TV Lady -- Bitten By A Zombie -- Eaten By Your Mattress -- Stuffed To Splitting -- Face Stuck In Liquid Nitrogen -- Crushed By Crumbling Church Debris -- Bitten By The Jaws Of Life -- A Machete To The Crotch -- Showering With A Chain-Saw -- In A Room Filled With Razor Wire -- Pod People'd With Your Dog -- Force-Fed Art -- Skinned By A Witch -- Beaten With An Oar -- Curbed -- Cape Malfunction -- In The Corner -- Cooked In A Tanning Bed -- Diced -- Punched Through The Head -- Bugs Sucking On Your Head
.
Who? Jason Adams When? 12:55 PM