The Boys Of Twilight Are Having A Dick-Off

I really hate - really! I do! - being forced to go here, but if I don't who will? I'm the Great Dick Avenger, calling it out where ever it makes itself known! Ahem. But ya see, look at these pictures of Twilight star Taylor Lautner leaving the gym today (via): 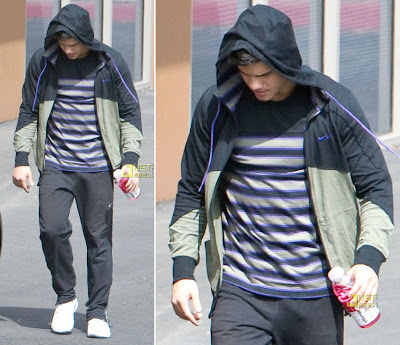 Coming one day after similarly snug-crotched pictures of his Twilight co-star Kellan Lutz where I wondered if there weren't some sort of beefcake competition going on between the men of the cast, well, now I think I'm onto something. I mean, really. It's like when Paris and Britney and Linsday were all flashing their lady-flowers only with a thin cotton layer of cover-up and 200% more penis.

Jason. We all win.

Umm, yeah-so when is this going to turn into a Do, Dump, or Marry?

John that's so weird, I just had the same thought.

at least Robert Pattinson is an adult!!! Oh and by the way, speaking of Rob, he's in NYC now and I swear to god that if you end up on an elevator with him I will murder you... MURDER!!
your friend,
bri

He's cute, but this is further proof that he's on a cycle of steroids...