A Total Of Four Toes 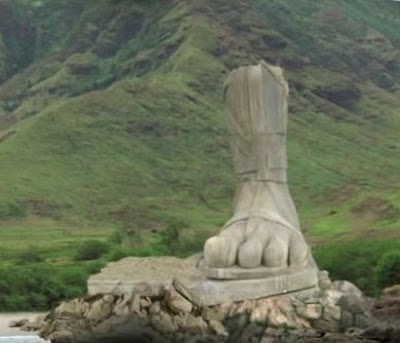 So now that we know who the statue is of on Lost - via here; I won't reveal the identity myself in case you don't want to know - I'm of two minds.

First off, click here to read more on the identity of who the statue is. Obviously, it makes sense, mythologically speaking. And adds the usual layers of brainy shading to the show's back-story. And this has been the silly thing I've been harping on for years now so yippe-ki-ay answer.

But secondly, the fact that this factoid's been released in this manner - in an official ABC recap of the last episode - makes me wonder if they're just getting this mystery out of the way because they realized doofuses - doofi? - like me are still harping about wanting to know and they have no room or intention of crawling further down this particular rabbit hole in the final run of episodes.

Which is fine. These final episodes should focus on character stuff first and foremost - we've been with our castaways for five seasons now and that's where my interest in this final stretch lay too.

But I still wanna see the damned statue from the front while still standing. And I'll be annoyed if that never happens. What can I say? I'm infuriatingly simple sometimes.
.
Who? Jason Adams When? 3:59 PM

Your theory continues to make no sense, homeslaughter.

You could always Google the name and see other images of that particular entity from the front.

And just because I think it sounds like funny hip-hop dirty word, my capsha verification word for this comment is "gismsta."

Well sure, I've done that, Prospero! But it ain't the same. I want them to waste precious Jack-waxing dollars on the CG to create it themselves! ;-)

I'm probably just being an asshole, but I seriously hope we never get answers on so many of the geek-baiting minutiae like the statue or the numbers. I was kinda disappointed we got closure on Vincent.