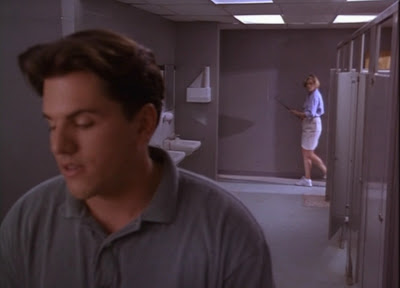 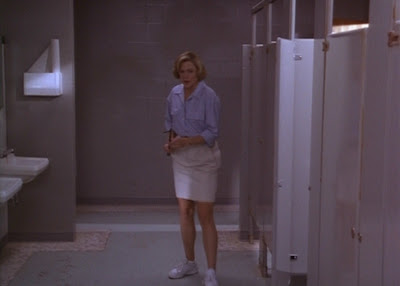 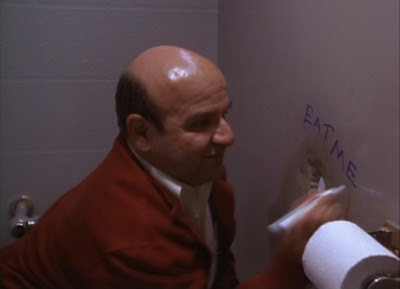 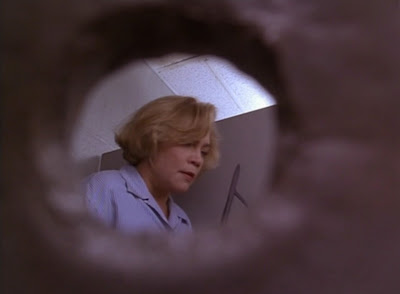 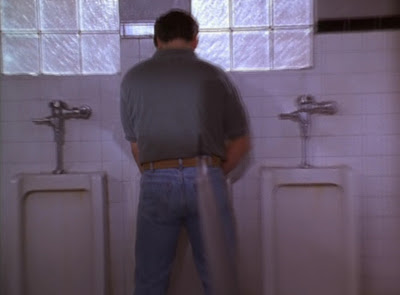 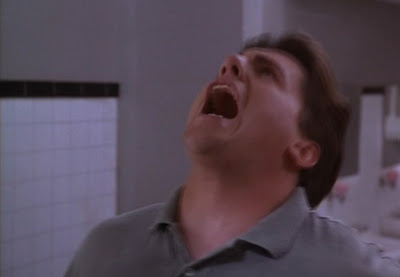 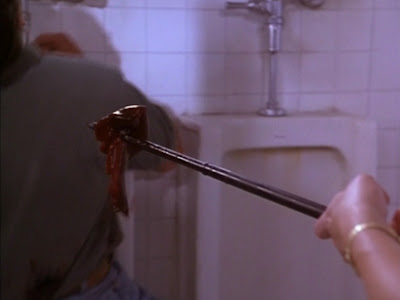 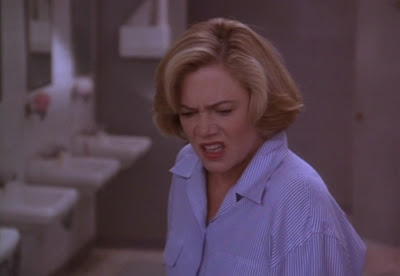 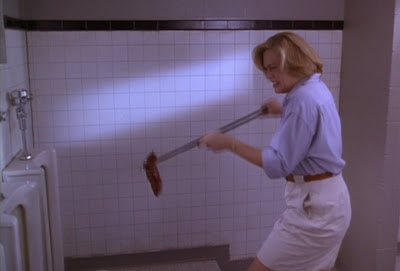 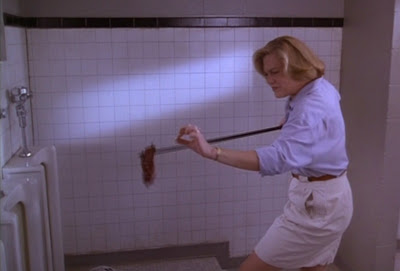 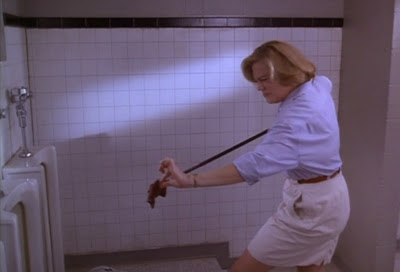 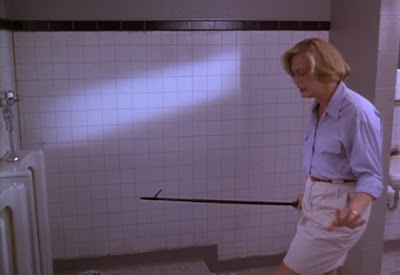 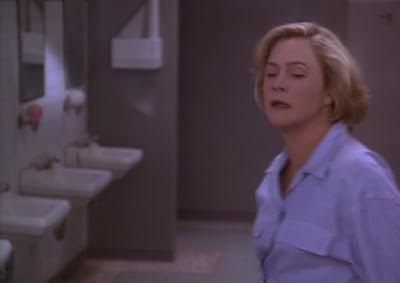 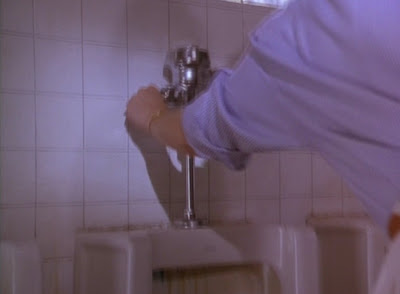 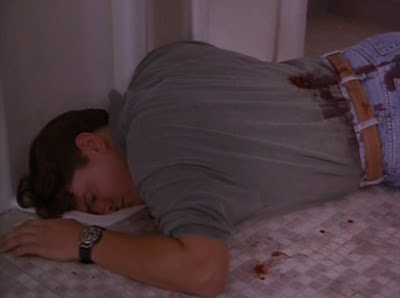 Serial Mom (1994)
I figure as long as John Waters has already come up twice in the past week (instance number one, instance number two) I ought to finally do this death scene since it's one I love and has always been lodged in my back-catalog of To Do Deaths. That bit of comedy Kathleen Turner performs with that... what is that? His liver?... on the tip of that poker is priceless, isn't it? So perfectly played. God she's a funny broad. I never would've ever thought to cast her in a John Waters movie before this but she fit in so perfectly. Who knew? John did, that's who! Just like, who else would've ever thought to give us a glory-hole POV shot? Glory be to that wonderful man.

Anyway, I wish Kathleen did more movies; I miss her. And John, dammit! Get these two together again! 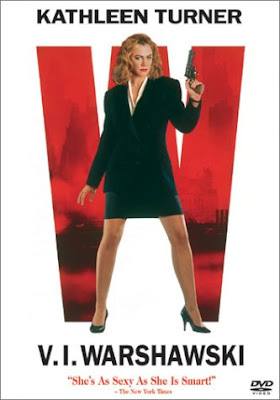 Random thing I have to mention: For some reason when I was taking a shower this morning I couldn't stop thinking about the movie V.I. Warshawski. WTF? Anybody remember that hot tranny mess? Is that what killed Kathleen Turner's career? The awesome War of the Roses was only a couple years before this, and then, after this, cue tumbleweeds rolling across her career. But I think my cousin had a crush on her so I remember us renting this movie and watching it like a dozen times way back when, but I couldn't tell you a single thing about it now.

--------------------------------------
Previous Ways Not To Die: DO Forget To Add The Fabric Softener -- Any Of The Ways Depicted In This Masterpiece Of Lost Cinema -- Rode Down In The Friscalating Dusklight -- Good Morning, Sunshine! -- Mornin' Cuppa Drano -- The Cylon-Engineered Apocalypse -- Tender-Eye-zed -- Martian Atmospheric Asphyxiation -- Maimed By A Mystical Person-Cat -- The Sheets Are Not To Be Trusted -- Handicapable Face-Hacked -- I Did It For You, Faramir -- Summertime In The Park... Of A Pedophile's Mind -- A Vengeful Elevator God: Part 3 -- Strung Up With Festive Holiday Bulbs By Santa Claus Himself -- A Vengeful Elevator God: Part 2 -- A Vengeful Elevator God: Part 1 -- Decapitated Plucked Broiled & Sliced -- Head On A Stick! -- A Trip To The Ol' Wood-Chipper -- Pointed By The T-1000 -- Sucking Face With Freddy Krueger -- A Pen-Full Of Home-Brewed Speed to The Eye -- Motivational Speech, Interrupted -- A Freak Ephemera Storm -- When Ya Gotta Go... Ya Gotta Go -- Hoisted By Your Own Hand Grenade -- Having The Years Suction-Cupped Away -- Criss-Cross -- Turned Into A Person-Cocoon By The Touch Of A Little Girl's Mirror Doppleganger -- Satisfying Society's "Pop Princess" Blood-Lust -- Done In By The Doggie Door -- Tuned Out -- Taking the 107th Step -- Rescuing Gretchen -- Incinerated By Lousy Dialogue -- Starred & Striped Forever -- Vivisection Via Vaginally-Minded Barbed-Wire -- Chompers (Down There) -- Run Down By M. Night Shyamalan -- Everything Up To And Including The Kitchen Toaster -- Sacrificed To Kali -- Via The Gargantuan Venom Of The Black Mamba Snake -- Turned Into An Evil Robot -- The Out-Of-Nowhere Careening Vehicle Splat -- "Oh My God... It's Dip!!!" -- Critter Balled -- Stuff'd -- A Hot-Air Balloon Ride... Straight To Hell!!! -- Puppy Betrayal -- High-Heeled By A Girlfriend Impersonator -- Flip-Top Beheaded -- Because I'm Too Goddamned Beautiful To Live -- By Choosing... Poorly... -- Fried Alive Due To Baby Ingenuity -- A Good Old-Fashioned Tentacle Smothering -- Eepa! Eepa! -- Gremlins Ate My Stairlift -- An Icicle Thru The Eye -- Face Carved Off By Ghost Doctor After Lesbian Tryst With Zombie Women -- Electrocuted By Fallen Power-Lines -- A Mouthful Of Flare -- Taken By The TV Lady -- Bitten By A Zombie -- Eaten By Your Mattress -- Stuffed To Splitting -- Face Stuck In Liquid Nitrogen -- Crushed By Crumbling Church Debris -- Bitten By The Jaws Of Life -- A Machete To The Crotch -- Showering With A Chain-Saw -- In A Room Filled With Razor Wire -- Pod People'd With Your Dog -- Force-Fed Art -- Skinned By A Witch -- Beaten With An Oar -- Curbed -- Cape Malfunction -- In The Corner -- Cooked In A Tanning Bed -- Diced -- Punched Through The Head -- Bugs Sucking On Your Head
.
Who? Jason Adams When? 1:50 PM

I just watched it the other night with the new commentary by both Mr. Waters and Ms. Turner. I think she was inebriated.