My name is JA and I am a PJ-Hogan-aholic. Oh sure, there are far worse things to be. (I'm looking at you, people-who-defend-Kate-Hudson). But when you bump into somebody on the street post-movie and they ask you what you just saw and you react with embarrassment... well, then you might have a problem. It's a dirty little secret, but I'm shouting it to the rafters! 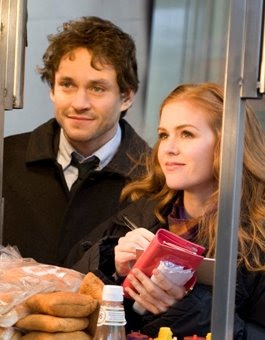 Alright, not quite where Shopaholic is concerned. But only on a couple of occasions did this movie make my brain hurt. It's terribly formulaic - I could've scrawled out the entire story on a napkin before the credits were even over - but seeing the mood I was in yesterday that was sorta what I was looking for. What make it work is PJ Hogan's sublime casting - there isn't a single face in this crowd that I disliked. Imagine this movie in the hands of say... Kate Hudson. Shudder.

Moving on. The supporting players are a star-field of comic luminescence - Joan Cusack, John Goodman, Leslie Bibb, Wendie Malick, Julie Hagerty (so good to see you, Julie!), Krysten Ritter (I love that PJ got to strut his wedding-comedy stuff for a few brief seconds again in her storyline), and funniest of all, Kristen Scott Thomas, who has her way with the tiniest slice of cake ever put on film.

In terms of PJ Hogan films it was nice, but I long for the caustic edges that Muriel's Wedding wielded so sharply. This one's smarter than your average fluffy rom-com but still pretty by-the-numbers fluff all the same.

ETA I forgot to mention this, but somehow some way I immediately recognized Scott Evans, aka Chris Evans' hot gay brother, who has a small role in the film (he's the mail-clerk flirting with the receptionist at the magazine where Isla wants to work while Isla flails about in that rack of clothing), even though I'm fairly certain I've never seen Mr. Evans in anything besides that brief stint on Fringe earlier this year. Being obsessed with his brother has spilled over, I guess. But keep on, keepin' on, hot gay Scott Evans! 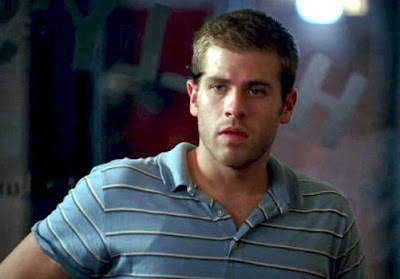 Whaa? No mention of your man Jake's cameo in a Prince Of Persia poster? Did you blink and miss him or was it that bad?

I love that you called me out on this, anon! I totally did catch the glimpse of that poster and forgot until you just now mentioned it. It was so quick though - was it actually a picture of Jake or was it a drawing type thing? It looked kinda cartoony to me. But it had vanished as soon as I realized what I was seeing. Hmm, I need to see if somebody's put that image on the internet anywhere....