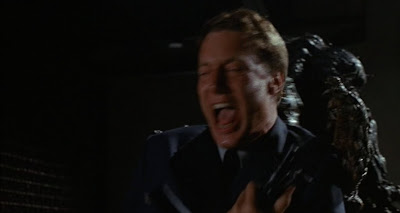 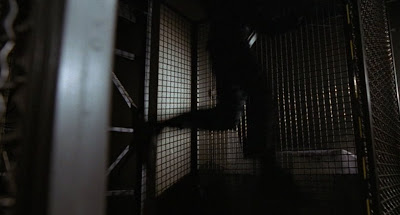 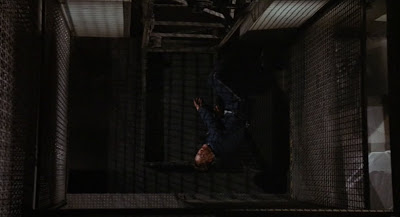 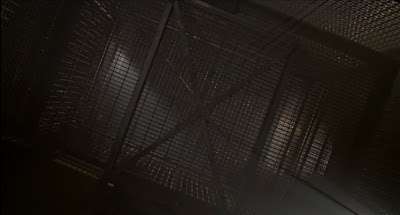 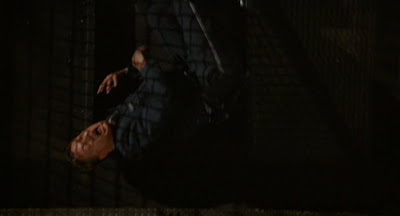 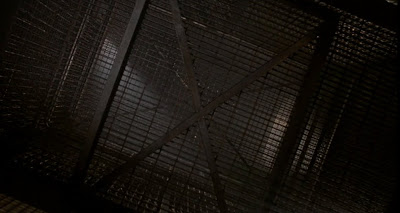 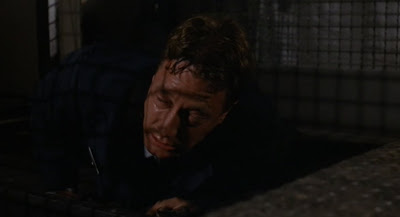 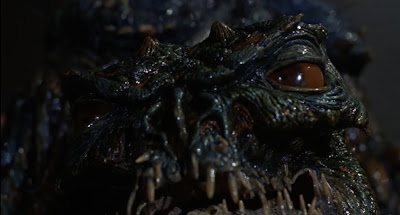 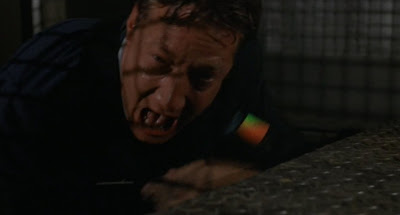 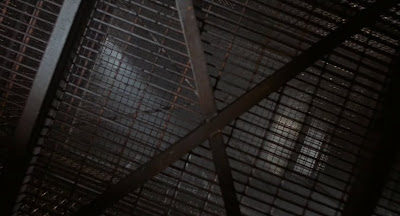 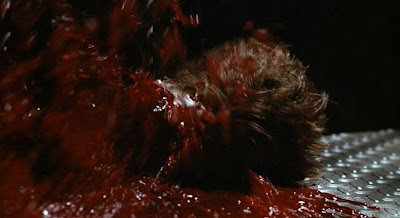 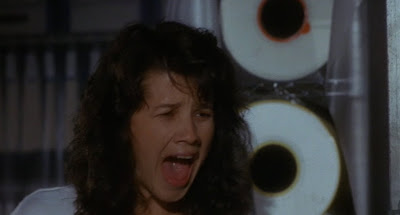 The Fly 2 (1989)
This is another death scene that's relatively dark and hard to tell what's going on out of context - hard to believe that a masterpiece like The Fly 2 might be shot sloppily, I know! - so here's what just happened: a security guard is thrown by The Mutated Eric Stoltz Fly-Person (aka BrundleFly Version 2.0) into a ground-floor elevator shaft. For some reason, he lays there for like a minute and a half while the elevator slowly, slowly comes down on him - seriously, this shit takes FOREVER - and only manages to crawl far enough so his head is sticking out... which then promptly and gloriously explodes like a pinata filled with strawberry-jam as the elevator crushes him.

This film is of course an affront to all that David Cronenberg accomplished with his version, but it does have a couple of things going for it. Firstly, The Zuniga is in the house - scream, girl, screeeeam!

And secondly, it gets pretty damned gory at the end, and that's fun. Fun for the whole family! I don't remember what age I was when I saw this movie first - had to be at least 13 or so - but I do know that the death documented above (and strangely not the gruesome scene just before this when the fly vomits acid onto another man's face... said face promptly turning into a smear of pulsating day-glo goo) that scarred me against gore for a very long time.

See, all through high school and into college I feigned superiority to explicit gore scenes and praised the truly higher art of accomplishing one's scares through the old fashioned but proven techniques of tension and the art of the slow reveal and blah blah blah I still love those things but sometimes you just really need to see a fucker's head blow up, ya know? I know you know. That's why I love you.

--------------------------------------
Previous Ways Not To Die: Strung Up With Festive Holiday Bulbs By Santa Claus Himself -- A Vengeful Elevator God: Part 2 -- A Vengeful Elevator God: Part 1 -- Decapitated Plucked Broiled & Sliced -- Head On A Stick! -- A Trip To The Ol' Wood-Chipper -- Pointed By The T-1000 -- Sucking Face With Freddy Krueger -- A Pen-Full Of Home-Brewed Speed to The Eye -- Motivational Speech, Interrupted -- A Freak Ephemera Storm -- When Ya Gotta Go... Ya Gotta Go -- Hoisted By Your Own Hand Grenade -- Having The Years Suction-Cupped Away -- Criss-Cross -- Turned Into A Person-Cocoon By The Touch Of A Little Girl's Mirror Doppleganger -- Satisfying Society's "Pop Princess" Blood-Lust -- Done In By The Doggie Door -- Tuned Out -- Taking the 107th Step -- Rescuing Gretchen -- Incinerated By Lousy Dialogue -- Starred & Striped Forever -- Vivisection Via Vaginally-Minded Barbed-Wire -- Chompers (Down There) -- Run Down By M. Night Shyamalan -- Everything Up To And Including The Kitchen Toaster -- Sacrificed To Kali -- Via The Gargantuan Venom Of The Black Mamba Snake -- Turned Into An Evil Robot -- The Out-Of-Nowhere Careening Vehicle Splat -- "Oh My God... It's Dip!!!" -- Critter Balled -- Stuff'd -- A Hot-Air Balloon Ride... Straight To Hell!!! -- Puppy Betrayal -- High-Heeled By A Girlfriend Impersonator -- Flip-Top Beheaded -- Because I'm Too Goddamned Beautiful To Live -- By Choosing... Poorly... -- Fried Alive Due To Baby Ingenuity -- A Good Old-Fashioned Tentacle Smothering -- Eepa! Eepa! -- Gremlins Ate My Stairlift -- An Icicle Thru The Eye -- Face Carved Off By Ghost Doctor After Lesbian Tryst With Zombie Women -- Electrocuted By Fallen Power-Lines -- A Mouthful Of Flare -- Taken By The TV Lady -- Bitten By A Zombie -- Eaten By Your Mattress -- Stuffed To Splitting -- Face Stuck In Liquid Nitrogen -- Crushed By Crumbling Church Debris -- Bitten By The Jaws Of Life -- A Machete To The Crotch -- Showering With A Chain-Saw -- In A Room Filled With Razor Wire -- Pod People'd With Your Dog -- Force-Fed Art -- Skinned By A Witch -- Beaten With An Oar -- Curbed -- Cape Malfunction -- In The Corner -- Cooked In A Tanning Bed -- Diced -- Punched Through The Head -- Bugs Sucking On Your Head
.
Who? Jason Adams When? 11:42 AM
Labels: David Cronenberg, horror, Thursday Kills

You have very cleverly isolated literally the only moment of this movie that I remember. I was so damn excited when it came out, thinking that it was going to somehow continue the greatness of Cronenberg's remake, to no avail.

But WOW do I remember that head going squish. Nice job.

It's weird, isn't it? That this moment is so memorable. Because watching it again for this post after not having seen it in forever it really does happen right after a much more gruesome death and this scene itself is so illogically paced... but man the exploding head is wicked gross. The sound effect is wonderful, like a watermelon hit with a sledgehammer. Thwockpth.