Terminator 2: Judgment Day (1991)
See if you can follow me here: it was driving me crazy, trying to figure out where I knew this actor from. And then it struck me - he played Christopher Lee's lab assistant in Gremlins 2: The New Batch. But then I remembered that Chris had two lab assistants in the movie, twins: 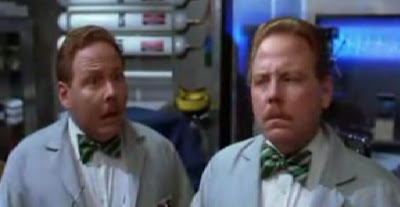 And then I realized that the Terminator 2 scene I've documented above is actually just using twins for visual trickery, and it's not some split-screen magic like I'd always assumed it was. Even while watching the scene this morning before having this realization I found myself looking for those tell-tale signs of manipulation when you have the same actor interacting with himself somehow, and couldn't find any, which sent me off thinking how well the special effects hold up in this movie... but it was twins all along! Tricky, James Cameron. Tricky!

The guys' names are Dan and Don Stanton, for the record, and they made my childhood magic. Thanks, guys!

This also got me thinking about the weird rules for this specific Terminator - He can't make himself into a gun or a bomb! Nothing with moving parts! - which inevitably leads to me thinking about the wonky time-logic of the series... it really is all over the place, with the more complicated versions of Terminators showing up at later and later versions of "the present"... I've never found their attempts to explain away the conundrums they present very satisfactory. But then something big goes boom and I forget to care...

--------------------------------------
Previous Ways Not To Die: Sucking Face With Freddy Krueger -- A Pen-Full Of Home-Brewed Speed to The Eye -- Motivational Speech, Interrupted -- A Freak Ephemera Storm -- When Ya Gotta Go... Ya Gotta Go -- Hoisted By Your Own Hand Grenade -- Having The Years Suction-Cupped Away -- Criss-Cross -- Turned Into A Person-Cocoon By The Touch Of A Little Girl's Mirror Doppleganger -- Satisfying Society's "Pop Princess" Blood-Lust -- Done In By The Doggie Door -- Tuned Out -- Taking the 107th Step -- Rescuing Gretchen -- Incinerated By Lousy Dialogue -- Starred & Striped Forever -- Vivisection Via Vaginally-Minded Barbed-Wire -- Chompers (Down There) -- Run Down By M. Night Shyamalan -- Everything Up To And Including The Kitchen Toaster -- Sacrificed To Kali -- Via The Gargantuan Venom Of The Black Mamba Snake -- Turned Into An Evil Robot -- The Out-Of-Nowhere Careening Vehicle Splat -- "Oh My God... It's Dip!!!" -- Critter Balled -- Stuff'd -- A Hot-Air Balloon Ride... Straight To Hell!!! -- Puppy Betrayal -- High-Heeled By A Girlfriend Impersonator -- Flip-Top Beheaded -- Because I'm Too Goddamned Beautiful To Live -- By Choosing... Poorly... -- Fried Alive Due To Baby Ingenuity -- A Good Old-Fashioned Tentacle Smothering -- Eepa! Eepa! -- Gremlins Ate My Stairlift -- An Icicle Thru The Eye -- Face Carved Off By Ghost Doctor After Lesbian Tryst With Zombie Women -- Electrocuted By Fallen Power-Lines -- A Mouthful Of Flare -- Taken By The TV Lady -- Bitten By A Zombie -- Eaten By Your Mattress -- Stuffed To Splitting -- Face Stuck In Liquid Nitrogen -- Crushed By Crumbling Church Debris -- Bitten By The Jaws Of Life -- A Machete To The Crotch -- Showering With A Chain-Saw -- In A Room Filled With Razor Wire -- Pod People'd With Your Dog -- Force-Fed Art -- Skinned By A Witch -- Beaten With An Oar -- Curbed -- Cape Malfunction -- In The Corner -- Cooked In A Tanning Bed -- Diced -- Punched Through The Head -- Bugs Sucking On Your Head
.

Linda Hamilton's twin sister was also used in a couple scenes (notably, a cut scene where they remove the chip from the Termintor's head - the entire scene is shot with a "mirror" in full view of the camera which is actually a window to another, identical set with Leslie Hamilton Gearren doubling Linda Hamilton AND the shot during the climax of Sarah Connor appearing behind the T-1000 version of herself in a single shot)

I salute you, seangstm, for that amazing bit of geektastic trivia. Kick ass.