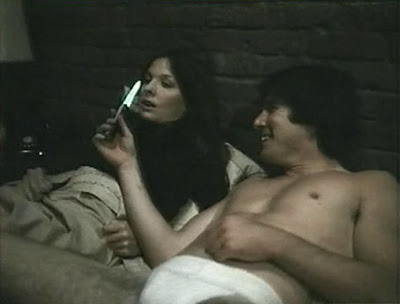 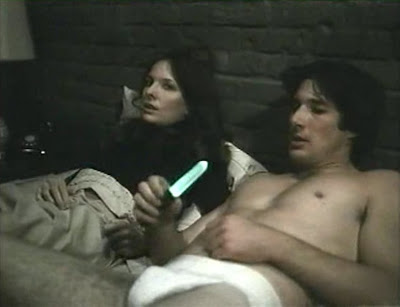 I am scared, Richard-Gere-in-a-jockstrap! Not of your glow-in-the-dark switchblade, mind you, but of the thought that Looking For Mr. Goodbar might never ever be released on DVD. What's the deal with that, anyway? Making us have to do with crappy VHS copies of you bouncing around doing push-ups in a jockstrap. The world would be a better place if this existed in crystal clear 1080p, ya know?

Seriously, this is a fascinating film with one of Diane Keaton's greatest performances (at the height of her skills really, although I think I prefer her work in Annie Hall - duh - and Reds), and it's next to impossible to see Goodbar other than on shit-tastic VHS. Ridiculous.

This post was brought to you by this post over at Club Silencio, comparing LFMG to Twin Peaks...
.
Who? Jason Adams When? 9:17 AM

I saw this movie in an American independent cinema class three years ago and I'm still dying for it to come out on DVD. Between the acting and the soundtrack, it's really sad that the only versions out there are VHS. What's more amazing to me is that Cruising got a DVD release before LFMGB.

I saw this several years ago and was amazed. There are a lot of um... interesting scenes in this film. I don't know that I'd call it a good film but the scene with Gere doing quasi kung-fu in a jock strap with the glowing knife definitely left an impression. That said I'd like to see it come out on dvd so I could prove to people that this actually exists.

i saw this movie when i was like 17! It made a lasting imression on me! The ending was the most horrific i had ever seen at that time! I remember alot of gay orginizations protesting the film at the time! But overall i thought it was extremely well acted and very true to the club scene at the time!!!