"No, please don't kill me, Mr. Ghostface,
I wanna be in the sequel!"

Scream (1996)
Ouchie! With all the chatter I instigated earlier this week involving the lovely lady performances of horror cinema, I gots Scream on my mind. Mostly because it got me thinking about how awesometastic those first several minutes with Drew Barrymore are, but from there my mind wandered into the rest of the film, and what a bunch of great ladies there were busting 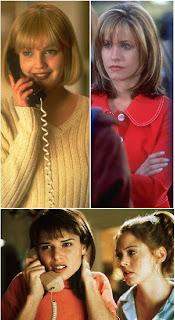 balls left and right. Neve Campbell is basically the tormented straight woman to everybody else's foibles, but she's more interesting here than she's ever managed in anything else. Then there's the terrible two-some that surround her, starting with her frosted-chunk nemesis Gale Weathers - oh how I lurve that name - played with hilarious bitchiness by Courtney Cox. And then of course Neve's best bud, the bosomy firecracker Tatum, played by my beloved Rose McGowan, seen biting the business end of the garage door above.

Anyway, this is a Thursday's Ways Not To Die that I've been wanting to do for ages. One of my absolute most prized death scenes. I love it so very much; I want to roll around in on the kitchen floor with it and have it call me filthy names in my ear. The entire scene sums up what was so special about Scream at the time: it has our chesty friend go to a dark place all by herself, and then gives us the clichéd "cat scare" to kick things off - Look out! Jumping feline! But then Tatum, bless her psychedelic skirt, kicks the living shit out of the killer. Seriously, she wallops the hell out of him. Beer bottles are flung into his crotch and face, she fucking flips him upside down over her back... lady delivers a righteous beat-down.

But sadly, she then goes and chooses unwisely. You're never gonna fit through that doggie door, Tatum! You are a shapely girl (wonderfully so; even this gay boy can tell)!

And in a stroke of deviant brilliance, whomever is behind that mask (do we know who's behind the mask here? I can't remember, but I think it's supposed to be Billy doing this kill... um, spoiler?) just switches on the garage door and lets technology do the job for him. Bad. Ass.

And horrible, of course. RIP Tatum, you saucy broad. Your candle burned out well before your legend ever did. BAM! Superbitch!

--------------------------------------
Previous Ways Not To Die: Tuned Out -- Taking the 107th Step -- Rescuing Gretchen -- Incinerated By Lousy Dialogue -- Starred & Striped Forever -- Vivisection Via Vaginally-Minded Barbed-Wire -- Chompers (Down There) -- Run Down By M. Night Shyamalan -- Everything Up To And Including The Kitchen Toaster -- Sacrificed To Kali -- Via The Gargantuan Venom Of The Black Mamba Snake -- Turned Into An Evil Robot -- The Out-Of-Nowhere Careening Vehicle Splat -- "Oh My God... It's Dip!!!" -- Critter Balled -- Stuff'd -- A Hot-Air Balloon Ride... Straight To Hell!!! -- Puppy Betrayal -- High-Heeled By A Girlfriend Impersonator -- Flip-Top Beheaded -- Because I'm Too Goddamned Beautiful To Live -- By Choosing... Poorly... -- Fried Alive Due To Baby Ingenuity -- A Good Old-Fashioned Tentacle Smothering -- Eepa! Eepa! -- Gremlins Ate My Stairlift -- An Icicle Thru The Eye -- Face Carved Off By Ghost Doctor After Lesbian Tryst With Zombie Women -- Electrocuted By Fallen Power-Lines -- A Mouthful Of Flare -- Taken By The TV Lady -- Bitten By A Zombie -- Eaten By Your Mattress -- Stuffed To Splitting -- Face Stuck In Liquid Nitrogen -- Crushed By Crumbling Church Debris -- Bitten By The Jaws Of Life -- A Machete To The Crotch -- Showering With A Chain-Saw -- In A Room Filled With Razor Wire -- Pod People'd With Your Dog -- Force-Fed Art -- Skinned By A Witch -- Beaten With An Oar -- Curbed -- Cape Malfunction -- In The Corner -- Cooked In A Tanning Bed -- Diced -- Punched Through The Head -- Bugs Sucking On Your Head
.
Who? Jason Adams When? 6:32 AM

I'm copying that first still and saving it to My Pictures.

Love it. One of the best scene in a movie full of 'em. "Superbitch!" So awesome.

Damn you Scream for introducing me to Skeet Ulrich and Matthew Lillard.

Damn you Skeet and Matthew for not being as good in anything else for the last 12 frakkin years.

Jamie, well I hate to be a hater, but choke on a corndog please.

You know my love for this movie knows no bounds and this scene is just part of the reason why.