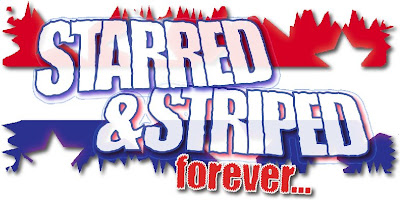 The Hills Have Eyes (2006)
Happy Independence Day! Nothing says "A warm-hearted celebration of Americana" like the business end of Old Glory stuck through the charred remains on Dear Old Dad! Why, the only thing that'd make it more special would be if Dear Old Mom were beside him, choked to death on an apple pie.

It should be mentioned that Dear Old Dad - spectacularly named "Big Bob Carter" here - is played by the wonderful Ted Levine, aka Jame "Buffalo Bill" Gumb of Silence of the Lambs fame. It puts the lotion in the basket or else it gets the hose again!

Conversation starter: Alexandre Aja's 2006 version of Hills, seen above, is miles better than Wes Craven's 1977 original. Discuss.
Have a lovely fourth, everybody!
-------------
Previous Ways Not To Die: Vivisection Via Vaginally-Minded Barbed-Wire -- Chompers (Down There) -- Run Down By M. Night Shyamalan -- Everything Up To And Including The Kitchen Toaster -- Sacrificed To Kali -- Via The Gargantuan Venom Of The Black Mamba Snake -- Turned Into An Evil Robot -- The Out-Of-Nowhere Careening Vehicle Splat -- "Oh My God... It's Dip!!!" -- Critter Balled -- Stuff'd -- A Hot-Air Balloon Ride... Straight To Hell!!! -- Puppy Betrayal -- High-Heeled By A Girlfriend Impersonator -- Flip-Top Beheaded -- Because I'm Too Goddamned Beautiful To Live -- By Choosing... Poorly... -- Fried Alive Due To Baby Ingenuity -- A Good Old-Fashioned Tentacle Smothering -- Eepa! Eepa! -- Gremlins Ate My Stairlift -- An Icicle Thru The Eye -- Face Carved Off By Ghost Doctor After Lesbian Tryst With Zombie Women -- Electrocuted By Fallen Power-Lines -- A Mouthful Of Flare -- Taken By The TV Lady -- Bitten By A Zombie -- Eaten By Your Mattress -- Stuffed To Splitting -- Face Stuck In Liquid Nitrogen -- Crushed By Crumbling Church Debris -- Bitten By The Jaws Of Life -- A Machete To The Crotch -- Showering With A Chain-Saw -- In A Room Filled With Razor Wire -- Pod People'd With Your Dog -- Force-Fed Art -- Skinned By A Witch -- Beaten With An Oar -- Curbed -- Cape Malfunction -- In The Corner -- Cooked In A Tanning Bed -- Diced -- Punched Through The Head -- Bugs Sucking On Your Head
.
Who? Jason Adams When? 5:10 PM

Look, I'm as big a Craven freak as the next guy, but I'm totally with you on this - Alexandre Aja's remake is (charred) balls-to-the-wall intense and filthy and upsetting and grueling, while I always found the original to be, well, not all that great and somewhat overrated (apart from Michael Berryman, but that goes without saying, really). The 2007 sequel, however, was steaming awfulness.

Wonderfully said, Dave. I love Craven too, but his Hills is just... tepid, really. Aja's version is fuckin painful. It is what it's supposed to be.

Agree with the above comments.
I think Aja's version takes the best parts of Cravens, and turns it into a slicker, faster paced and more horrifying film. I was actually blown away by how good the remake was when I first saw it.

Agreed. Craven's film was scary towards the end, but Aja's version was terror all the way. That score creeped me out to no end.

Also, I was hoping that when I read the subject line it was going to be a death from Uncle Sam. One of my alltime favourite "so bad it's good" affairs.

I'm taking the counter argument. I'm with this remake until the wall-smashing mutant battle, bizarro music cues and savior mutant girl (who's still laughable in the original, but developed and laughable). I love the expansive elements in the remake, like the nuclear testing town, but I prefer my gritty cheap 70's shortcomings to overblown modern excess. Still a very valiant effort, but I have to stick up for Craven on this one. I'm always defending Aja for 'High Tension' anyways.