I chose today's specific, especially special WNTD because a) it was terrifically easy to compile, therefore a treat for me because I could be relatively lazy about it, and b) it's Donnie Darko for goodness sake! It's Jake Gyllenhaal! Dead Jake Gyllenhaal! There is no right way for Jake Gyllenhaal to die, after all. Yet die he has, in a couple of movies now... I don't think anybody's ready for the Brokeback Mountain Gay-Bashing episode of this series though, right? I think I made the right choice with Donnie here.

The single shot (crappy quality, too; sorry, it's the best we got) of Donnie's corpse seen above never actually made it into the movie... it's from a deleted scene, and Richard Kelly explains on the commentary that the shot always seemed ridiculous when edited into the film; that it was too horrific, it made people laugh or cringe, took them too much out of the film. I'd agree, and it's nice to see Mr. Kelly utilizing restraint for once (as much as I do love the man, he's clearly bought into his own hype a little much and needs to make more than two movies before crowning himself a misunderstood genius).

Out with the negative thoughts! Donnie's selfless act in the film - figuring out what he needs to do to set the chronology back on course, thereby sacrificing himself but saving the lives of his girlfriend and mother and sister all at once... well, it's saintly. Saint Donnie, y'all, for reals. 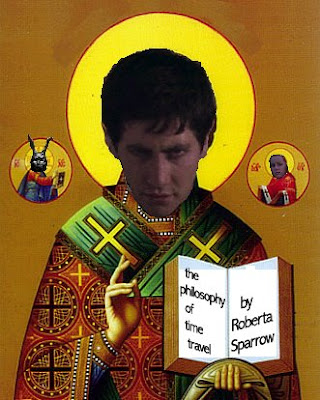 As usual, you can click through any of the links below to revisit the previous 49 ways not to die. A ghoulish lot, to be sure! Now on to the next fifty bouts of murder n' mayhem, shall we?

-------------
Previous Ways Not To Die: Incinerated By Lousy Dialogue -- Starred & Striped Forever -- Vivisection Via Vaginally-Minded Barbed-Wire -- Chompers (Down There) -- Run Down By M. Night Shyamalan -- Everything Up To And Including The Kitchen Toaster -- Sacrificed To Kali -- Via The Gargantuan Venom Of The Black Mamba Snake -- Turned Into An Evil Robot -- The Out-Of-Nowhere Careening Vehicle Splat -- "Oh My God... It's Dip!!!" -- Critter Balled -- Stuff'd -- A Hot-Air Balloon Ride... Straight To Hell!!! -- Puppy Betrayal -- High-Heeled By A Girlfriend Impersonator -- Flip-Top Beheaded -- Because I'm Too Goddamned Beautiful To Live -- By Choosing... Poorly... -- Fried Alive Due To Baby Ingenuity -- A Good Old-Fashioned Tentacle Smothering -- Eepa! Eepa! -- Gremlins Ate My Stairlift -- An Icicle Thru The Eye -- Face Carved Off By Ghost Doctor After Lesbian Tryst With Zombie Women -- Electrocuted By Fallen Power-Lines -- A Mouthful Of Flare -- Taken By The TV Lady -- Bitten By A Zombie -- Eaten By Your Mattress -- Stuffed To Splitting -- Face Stuck In Liquid Nitrogen -- Crushed By Crumbling Church Debris -- Bitten By The Jaws Of Life -- A Machete To The Crotch -- Showering With A Chain-Saw -- In A Room Filled With Razor Wire -- Pod People'd With Your Dog -- Force-Fed Art -- Skinned By A Witch -- Beaten With An Oar -- Curbed -- Cape Malfunction -- In The Corner -- Cooked In A Tanning Bed -- Diced -- Punched Through The Head -- Bugs Sucking On Your Head
.
Who? Jason Adams When? 11:00 AM
Labels: jake gyllenhaal, richard kelly, Thursday Kills

It rolls off the tongue.