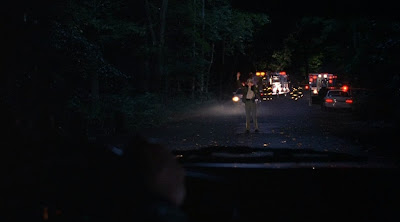 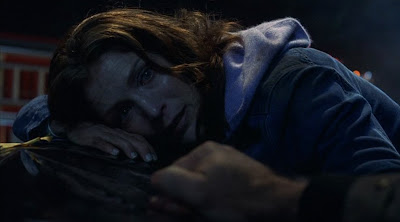 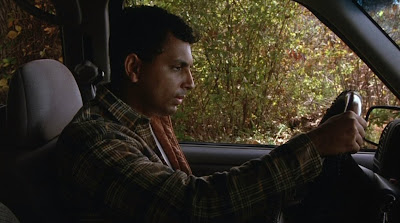 Signs (2002)
Well there's not really much to show for this week's Ways Not To Die - I really have to do a gruesome, bloody one of these things next; it's been too long - since the actual collision happens off-screen and we're only told about it after the fact in flashbacks scattered through the entire film, but with Night on my mind this week, and thinking back through his films (and as everybody feels the need to mention lately, all of his films up until tomorrow's release of The Happening have been rated PG-13 - oh my God he's gone R-rated! Hide the children!) we really don't see much, if any, death. We see ghosts in The Sixth Sense, but mostly well after their demises, and in Signs there's an evil alien invasion for chrissake and the only death we "see" is this one!

But Patricia Kalember, who plays Mel's dying wife Colleen, gives a terrific little performance in her flashback scenes - "Swing Merill swing..." - and begrudgingly I'll admit that Mel's great here too, and well... would you want your body pinned between a tree and a car so that once the car's removed your body will split open like a gut-filled Piñata? I thought not. Bad way to die, people! This is a BAD way to die.

This was also the first time that Night gave himself a large, important role in one of his films, as the man responsible for Colleen's death, and... well I personally thought he was fine (I have had, ahem, other opinions thrown at me on the matter). For one, I love the fact that every time we see his character he's attached, so to speak, to his car. In my opinion, it's only once M. Night gave himself a role where his character's writing manifests itself as the savior of mankind that things started getting sticky.

-------------
Previous Ways Not To Die: Everything Up To And Including The Kitchen Toaster -- Sacrificed To Kali -- Via The Gargantuan Venom Of The Black Mamba Snake -- Turned Into An Evil Robot -- The Out-Of-Nowhere Careening Vehicle Splat -- "Oh My God... It's Dip!!!" -- Critter Balled -- Stuff'd -- A Hot-Air Balloon Ride... Straight To Hell!!! -- Puppy Betrayal -- High-Heeled By A Girlfriend Impersonator -- Flip-Top Beheaded -- Because I'm Too Goddamned Beautiful To Live -- By Choosing... Poorly... -- Fried Alive Due To Baby Ingenuity -- A Good Old-Fashioned Tentacle Smothering -- Eepa! Eepa! -- Gremlins Ate My Stairlift -- An Icicle Thru The Eye -- Face Carved Off By Ghost Doctor After Lesbian Tryst With Zombie Women -- Electrocuted By Fallen Power-Lines -- A Mouthful Of Flare -- Taken By The TV Lady -- Bitten By A Zombie -- Eaten By Your Mattress -- Stuffed To Splitting -- Face Stuck In Liquid Nitrogen -- Crushed By Crumbling Church Debris -- Bitten By The Jaws Of Life -- A Machete To The Crotch -- Showering With A Chain-Saw -- In A Room Filled With Razor Wire -- Pod People'd With Your Dog -- Force-Fed Art -- Skinned By A Witch -- Beaten With An Oar -- Curbed -- Cape Malfunction -- In The Corner -- Cooked In A Tanning Bed -- Diced -- Punched Through The Head -- Bugs Sucking On Your Head
.
Who? Jason Adams When? 11:49 AM