I Am Not Shitting You... 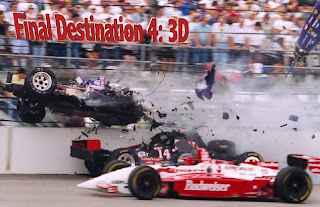 .... when I say that Final Destination 4: 3D is one of the movies I'm most looking forward to in the future. I always feel defensive when it comes to the Final Destination franchise, as if I have to defend my utter devotion unto it, but no more: this is not a guilty pleasure. This is straight-up ass-shaking joy these things bring me, and I will feel guilty no longer, I say!
Ahem. There's a long set-visit to the fourth film up over at STYD today. I had to stop reading it because of spoilers, but then the desire to know more grew too strong and I went back and skipped around it a bunch trying to look away when too much of a death scene was being given away. But it's well worth reading. One of the film's producers, Craig Perry, talks here about the use of 3D technology and the franchise in general:

""We had looked into doing the third one in 3D," Perry told us. "Which makes sense - 'Final Destination 3D' - but interestingly at the time, the technology was there to capture it, but there was very limited technology to exhibit it, so it didn't seem to make sense to spend an enormous amount of money capturing something that we couldn't really exploit for many years on end. The thing that made it work for us is that the 3D technology and the screens started to catch up with each other. We started to come to this nexus where it would make sense for us to do this movie in 3D."

"Let's be realistic, the 'Final Destination' movies, there's a certain formula that works," he continued. "I think the reason why it has worked for now up to four movies is that is at it's core, there's a really interesting central thesis that is a bit more existential than just a guy in a mask hacking people up. Don't get me wrong, I love those movies, I've been watching them since I was a kid, but this particular notion I think can translate into a whole bunch of other realms. You can do it over and over as long as the characters are slightly different and react to that positing of what the after-life might or might not be and how integrated is that after-life into our world. I think that we lucked out on the first one by coming up with an interesting fulcrum that we can balance a lot of things on. That, married with the prospect of doing it in 3D, I think facilitated us coming up with a bunch of scenarios that were fresh, original and yet familiar."

No, they aren't exactly reinventing the wheel here, but it's been obvious since the get-go that these films knew their purpose and how to have fun and exploit their semi-unique idea for maximum benefit to all. Hence these films - and specifically Part 2, the Citizen Kane of Exploding Body-Part Cinema - being so goshdarned entertaining. Viva la Destination!
.
Who? Jason Adams When? 11:21 AM
Labels: Final Destination, horror

JA--I am with you all the way on the Final Destination films. I actually won an auction years ago and own the outfit that Tim gets crushed by the glass in from #2.

I'm glad to see that David Ellis is directing the 4th one; high hopes...high hopes.