... do yourself a favor and
DO NOT I REPEAT DO NOT SEE Run Fatboy Run. 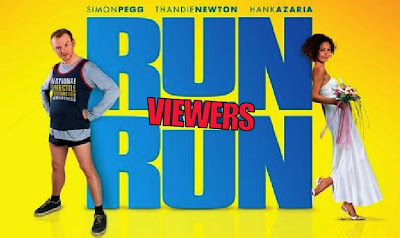 I walked out of it feeling like somebody had strangled my puppy. And I don't even have a puppy! Imagine if I did have a puppy. I'd have been really bad off then. I would've been laying there on the sidewalk cursing the heavens, cradling my head-lolling-about puppy in my arms, its little paws dangling limply at its sides, tongue drooping lifelessly out of the side of its mouth...

That's what Run Fatboy Run will do to you! To you and to all the imaginary puppies!

I didn't really have any expectations going into this movie beyond the thought "Simon Pegg won't let me down." Woe is that thought! Woe unto all of you thinking it!

The phrase "Directed by David Schwimmer" certainly gave me pause beforehand. And Thandie Newton as the love interest? A woman who seems to have the words "unlikeable shrew" imprinted onto her DNA? Really?

But Simon Pegg... Simon Pegg! To give Pegg a wee bit of credit, he was still pleasant enough here, amongst the ruins of every cliché you've ever seen or heard. But he doesn't deserve even that credit because he signed on for this blecch. He co-wrote this bleech! With Michael Ian Black! Ahhh!!! Why, Simon, why? I feel betrayed! Was it the money? Have you got a fetish for brittle scowling witches and were therefore desperate to plant your lips on that succubus Newton? Maybe you were a big fan of Friends and Lisa Kudrow wouldn't return your calls?

I'm only posting this because you all need to know! You need to know! If you have any residual Shaun of the Dead or Hot Fuzz affections, hold them dear to your bosom and avoid this movie! After I post this I am going to do my damnedest to forget this movie ever existed. Ugh! Ugliness! Horror! Unfunny business all around!
.
Who? Jason Adams When? 10:50 AM

But at the very least Hank Azaria's gotta be good, right? ...Right?

This is increasingly what I've been hearing, and it makes me very sad. I think my boyfriend will force me to see it anyway, but I really don't want to put myself through the pain.

I saw it too and I am deeply traumatized. This isn't fit for television viewing it's so bad.