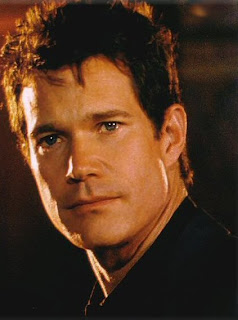 --- Daddy Dearest - STYD talks to the director of the remake of The Stepfather, and I'm sorry to say that it appears that my suggestion went unheeded and the titular villain played by Dylan Walsh will spend his time ogling the girlfriend of his step-son (girlfriend played by Amber Heard, step-son played by the smokin' Gossip Girl star Penn Badgley) and not his step-son as I'd hoped. What a waste!

Beyond just fulfilling pervy Walsh-Badgley daddy-son fantasies of my own, I really thought they could've dove into interesting territory making the evil stepfather a closet-case... alas.

They also apparently couldn't afford the original step-pa Terry O'Quinn for a cameo now that he's all high and mighty Locke-britches.

--- The Bushes Senior - Oliver Stone has cast James Cromwell and Ellen Burstyn as George Sr. and Barbara Bush in his Bush flick called W, following up that news of Elizabeth Banks landing the role of First Lady Laura. Can I... no, I cannot resist...

We have a winner! Ding ding!

--- A Storm Is Coming - Piper at Lazy Eye Theater, inspired by this week's DVD release of The Mist, puts on his Evil Meteorologist Pants and warns us what weather systems mean what to our immortal souls!!!
--- "Never underestimate the power of 3D boobs" - I never shall, Miss Stacie! I never shall. Stacie Ponder o' Final Girl has a delightful piece up at AMC Monsterfest Blog on the resurgence of the 3D horror film. 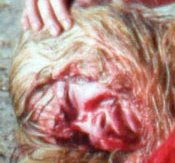 --- Wicked Gross - I almost threw up looking at the new still they have from The Ruins over at BD, so click on this link only if you're feeling strong. It's not the first picture you'll see, which is bad enough, but if you click on that picture an even more repulsive shot comes up and... I guess any doubts I might've had about this flick going the distance with respect to what was on the page of Scott Smith's horrific book are now gone. Gone with my lunch!
.
Who? Jason Adams When? 12:44 PM

Love the banner once again. The Broooood.