Arno Frisch Is Not In This Movie (Or, Fuck You Michael Haneke; I Love You, You Know)

This is just like me, isn't it? I go on and on about a movie for months (in this case, years) and then the movie comes and goes and from me? Not a peep. I'm vile, really. Wretched. 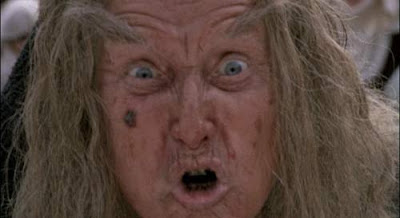 I even made a point last week of pointing out how very much I'd written on Michael Haneke's Funny Games U.S., and then I finally see it and WHAM my mouth clams all up. Shameful, really. 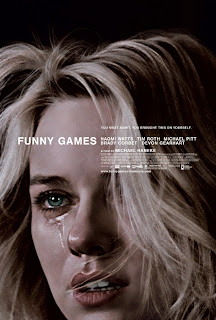 So what did I think? I thought it was an interesting experiment that was totally pointless for someone who'd seen the original numerous times to see. I don't really even know what to write about it, hence my silence. Everyone was good, filled the roles out nicely (even the much-decried-by-me Michael Pitt, whom Haneke wrings much mileage from via his inherent unlikability. Mind you, Pitt is no Arno Frisch, he never will be Arno Frisch, but it was a different take that worked).

The one trade-off, casting-wise, that surprised me by leaving me cold was Tim Roth - his father figure never left as deep an impression as the Mighty Ulrich Muhe did in the original (but them's odds I wouldn't want to have stacked against me).

So as I feared would be the case, I spent a hefty chunk of the film's running-time staring at the minuscule differences between the two films. The fact that Naomi Watts and Tim Roth's characters now have cell phones instead of just a wireless house phone, and the addition of dialogue needed to clear up what happened to Roth's phone, for one.

I also think (I'd have to look this info up, but haven't) that the aspect ratios were different between the two films frames - the original has a much more rectangular frame, I am fairly certain. Compare these two shots to see what I mean: 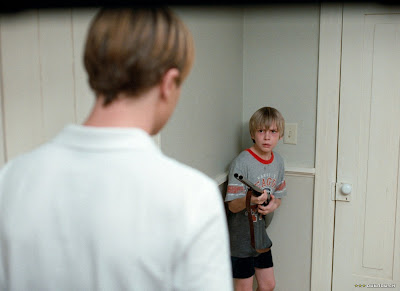 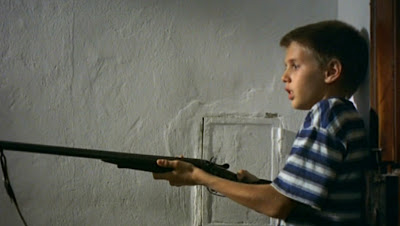 That second shot wasn't even in the supposedly shot-for-shot remake - something I noticed because it's one of the shots that's always stuck in my mind from the original. I imagine it wouldn't have been so striking in a less rectangular frame.

This change in aspect ratio also came into play in the film's centerpiece - the ten-minute long mostly-static single shot of three characters - two alive, one very recently not. The entire film hinges on this horrible moment, and in the 1997 film, from what I remember, the frame is wide enough to include all three characters at once, but in the remake I noticed a lot more panning of the camera going on to accommodate the slight bits of movement that happen in this moment, and all three characters are not immediately in frame. I'm not complaining about this change, mind you, but it does change the flow of this shot, possibly even for the better. The ever-so-slight bits of camera movement allows your eyes to shift from one side of the room to the other during the full ten minutes, manipulating our point-of-view even more... surely that's what Haneke had in mind, anyway.

So... see why I hadn't written on the film? It reduces me to half-empty theorizing on aspect ratios, for god's sake. I left the film feeling much the same as I do after watching the original now - that is to say, it really didn't offer me anything of substance new to chew on. If you haven't seen the original, I'd hazard to guess that you could watch either film and get the exact same reaction from either. Whether that's love or hate depends on you, I guess. 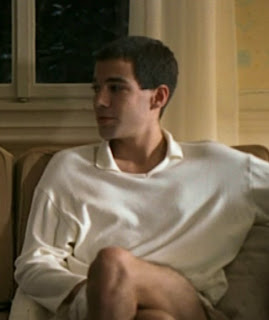 One last thing, though, and I'm swiping this realization from Joe R. - Awhile back I squealed with delight that the star of the original Funny Games, Arno Frisch, was listed on IMDb as appearing somewhere in the remake. The remake started, and there was his name in the opening credits! I watched every face closely. And let me tell you something: Arno Frisch is NOT in this movie. Joe commented upon exiting the theater, and I have to think he got this right, that this was Michael Haneke's way of fucking with those of us who are fans and are really familiar with the original - he might not get us with any changes to the text, but he'll get us amped up for Arno Frisch and then never give him to us. It seems like something Michael Haneke would do, anyway. He wouldn't want anybody leaving his film not pissed off, after all.

So congrats, Mr. Haneke. You once again got me. Now how about you get to making a new movie now, okay? Thanks!
.
Who? Jason Adams When? 2:35 PM

I found that this Funny Games didn't play as well as the original. I think he left too much alone from the original screenplay. What worked for 1997 Germany doesn't work for 2007 America. It probably didn't help that I was literally the ONLY PERSON in the theatre for the screening.

As to Arno, I never really thought he would be in the film. They never listed a charcter name for him and IMDB has quite its share of incorrect information. People get a whiff of a rumor or have some crazy idea and immediately post it on IMDB. I remember Stanley Kubrick's entry had him directing a number of different films that never came close to seeing the light of day.

But his name was in the opening credits, fdot! I think this was strictly a case of Haneke fucking with us.

I just couldn't make up my mind either way as to the effectiveness of this version versus the original, being way too familiar with the material.

It was? I don't remember seeing it there, but I did have a difficult time reading the red credits (red/greens tend to blur a little for me...touch color blind in that area). Has Haneke ever done anything quite that meta before?

I see he's off the IMDB page now...maybe I'll sneak in tomorrow to check out the credits again after I see Never Back Down (only human, you know...)

btw, has Arno Frisch played in anything noticeable apart from Funny Games ans Benny's Video, he which he was excellent? I mean, I'd really like to see how he would be in another role than the 'slightly' troubled man.

What type of blog is this. The first assumption I'm going to make, however is that you have a projector with which to play your movie reel on.