Okay, via JJ comes the actual scans from Vanity Fair of that Hitchcock imitation shoot, as opposed to the catty grabs I took from that tiny video yesterday. I know I came off as especially snarky yesterday, but obviously this photo-shoot is right up my alley and -with a couple of exceptions - it makes me really delighted to see. Here are all of em, with some commentary from yours truly on a select few that grabbed my interest: 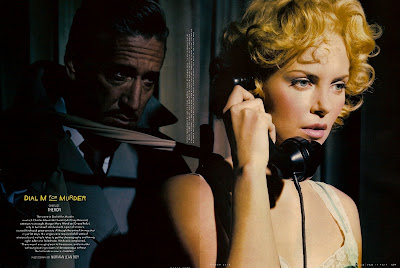 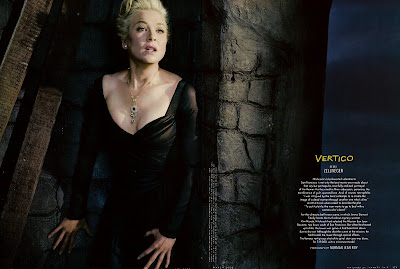 Renee looks much better in the still picture
than she did spazzing out in that video. 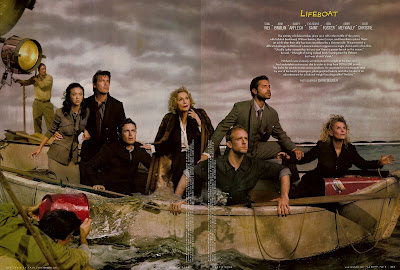 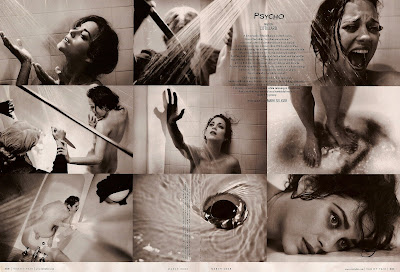 I like what they did with the pastiche of images, getting across the importance of the cuts in this scene, but I'm just really annoyed that she's both long-haired and brunette. Has Britney Spears stolen all the wigs in Hollywood? God. Who do you think got to play "Mother"? I betcha it's Graydon Carter. 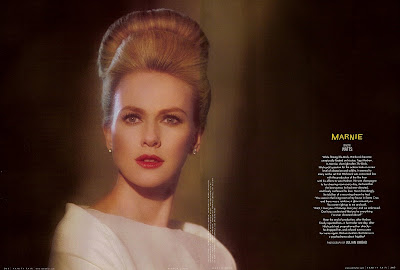 Totally stunning. Naomi's the only lady here who would've made Hitch's cut if he were casting his movies today. 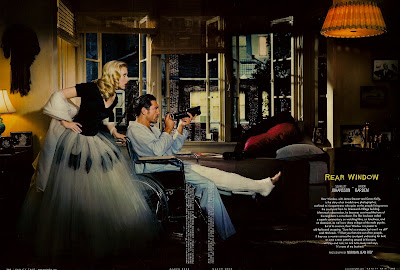 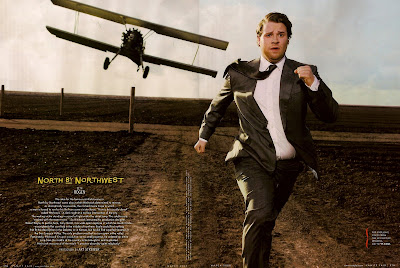 I know this was probably somebody's idea of funny - ha ha, let's have Seth Rogen running! But my sense of humor doesn't extend to fucking with Cary Grant in North by Northwest. I'm too big a Hitch geek. This just annoys me. 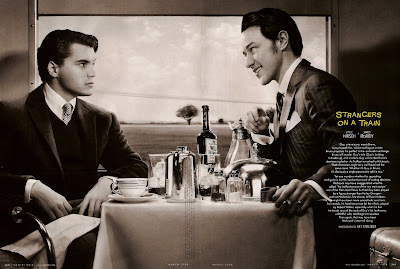 Swoon. Seriously - I never dreamed I'd want Strangers to be remade, but they somehow made me want to see it happen. "Somehow" being these two in beautiful suits staring into each other's eyes. So... it wasn't really that difficult after all, huh? 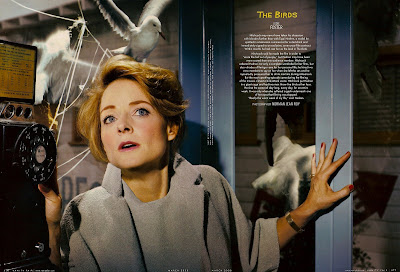 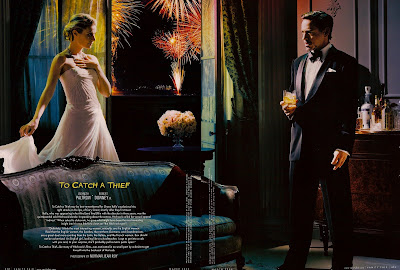 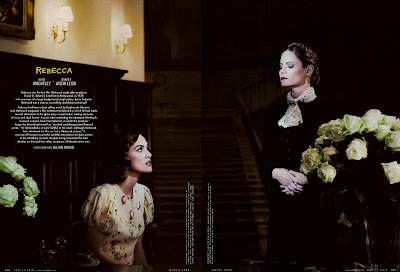 I know y'all probably think of me as a Kiera hater after calling her an anorexic bulldog in my Atonement review, but I'm not. And I think her Joan Fontaine impression here is ridiculously spot on. The forward slumped shoulders, the blank upward gaze - really, really perfect. And I can't even tell you how happy Jennifer Jason Leigh as Mrs. Danvers makes me. JJL has always creeped me out to no end, and I love it when she embraces that.
.
Who? Jason Adams When? 12:35 PM

Naomi does look like she belongs in one of his films, doesn't she?

And I, having just seem the dang picture last night, am completely loving the Rear Window pic.

The collection of people they've assembled for Lifeboat is so weird, it's perfect. I want them to make it! (And I don't see it as sacrilege since I don't like the original. So there.)

And that picture of Naomi is gorgeous. If she stars in The Birds, they'd better get it right. She could totally pull it off.

I haven't seen Lifeboat in probably ten or more years, and I was never terribly attached to it so I wouldn't expldoe if they remade it, but... it's a little static for a remake these days dontcha think? It's... a bunch of people sitting in a lifeboat talking. If they remade it now Michael Bay would direct, it'd be some sort of obscenely phallic speed boat they were stuck on, and they'd be racing through mine-fields and flying over the edge of a CG waterfall.

Naomi looks FAB. The only thing that keeps me from going INSANE about the remake of The Birds is her attachment to it.

Oh, and JD - what did you think of Rear Window? It's my favorite Hitch and it dukes it out with Rosemary's Baby as my favorite movie period, so... I'm somewhat attached to it. ;-)

I loved it, man. Like, immensely so. It's kinda weird how brilliant it was, since I'm not really accustomed to that high a level of it. Excellent all around.

No one said it had to be a blockbuster. They could make into some kind of horror/Lynchian existential pic about claustrophobia in open spaces or something.

But it has to have that exact cast.

(Of course, it probably wouldn't be a remake anymore if they did that... but still. I just want that cast!)

I am most offended by Robert Downey Jr trying to be Grant. At least Seth isn't a crackhead

Something in that hommage to "Rebecca" bothers me. Were those two women even in the same room at the same time?

I understand why they chose those people for the Lifeboat one for the most part. But... who the hell is Omar Metwally?

God, I'm the same about that remake of The Birds. If it were, like, Eva Longoria or something I'd be fuming, but Naomi... Naomi!

Omar's Witherspoon's husband (and Jake's prison toy) in Rendition. Good actor. Too bad he wasn't in a very good movie.

I love that they had one of Hitch's obsessions in the Lifeboat picture (that'd be Ms. Saint-when is she going to get a cameo-nomination from the Academy?)

Wow...No matter how long I look at the photo, I still don't see Renee Zellweger. She looks completely like a diferent person..
Nick