The below post is NSFW. And I wouldn't have it any other way.
Consider this week's Way Not To Die a Public Service Announcement. I am trying to do everyone a favor here by telling you that, under no circumstances, should you ever watch

Return To House On Haunted Hill. I know what you're thinking. Watch what? Huh? Sprechen sie Englisch bitte? Yes, there's a sequel to 1999's House on Haunted Hill, and shockingly - as if its damning lack of a much-needed "The" within its title wasn't clue enough - it's TERRIBLE. Not in an entertaining way; just in a terrible way. However, as happens with so many horror films, there is one moment, one tiny ray of sunshine, held within. It is this kernel that I always imagine gets these otherwise-awful movies made in the first place; that balls-to-the-wall crazy-shit moment that explodes off the page and sells the story to the suits, the director, whomever, and gets the movie slapped onto celluloid like so much cinematic baloney.

Held within this post is RTHOHH's moment. And please, even though what you see below might seem cool - and this moment is hysterically, ridiculously cool, in the most hysterical, ridiculous sort of way - know this: there is a full hour and a half around this scene of unbearable dreck. I know, we've all suffered at the hands of dreck before - for the sight of a booby or Jake Gyllenhaal's ass we will all suffer mightily. I'm just trying to do the right thing! Avoid this movie! All you need can be seen below.

First, a little set-up, since I'm assuming most of y'all ain't seen this movie already: So blah blah blah, a group of people Return To House On Haunted Hill. Blah blah blah, one's a Hot Tough Chick who likes girls (She likes girls! That's very important!) Blah blah blah, she's separated from the group. And then she hears a noise... 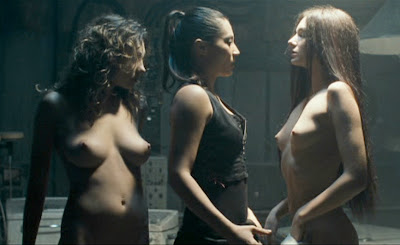 Steamy, eh? Now stop clicking over to your damn Netflix queue, straight men, bisexuals, and lesbians who are reading this! I just gave you the juiciest frames you could ever need. Seriously! Stop! Save yourselves!

I do love that tough chick just throws aside her gun and starts macking when the boobies come out though. "What? I'm in a House that rests upon a Haunted Hill? But... but, boobies! Humina humina!" Good grief. Anyway, cue the flashback-flashes in which we gets these zombie-fatales back-story, and it's straight out of V For Vendetta - they were in love, they were persecuted - only with 200% more naked making out and 500% more electro-shock therapy.

And from there the film steals shamelessly borrows a page from The Shining's playbook, and... what's this? These girls aren't really hot make-out-worthy babes that just happened to have designed themselves sexy straight-jacket lingerie and just happened to be wandering around deep within the bowels of this Haunted Hill House? They're, like, weirdly vaginal-faced monsters who do some sort of interpretive dance routine of terror? No!!! 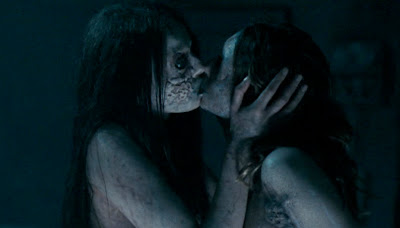 Yes. The horror! And, shockingly, not so sexy anymore.

Unfortunately for our absent-minded Hot Tough Chick, she's run away from her dead-lipstick-lesbian tormentors right into the arms of the Chief Madman of the House (really a hospital, but whatever; no, seriously, WHATEVER) on the Hill that is Haunted, Dr. Makes-With-The-Face-Carving-Off-A-Lot. He does some sort of crazed slashy scalpel baton-tossing and double-lutz into a front handspring routine here: 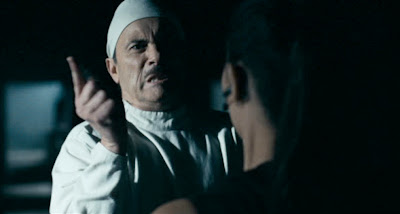 And then, oh glorious rapture... I rewound this next part like 20 times.... 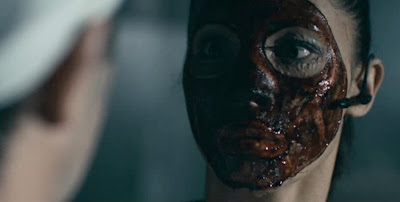 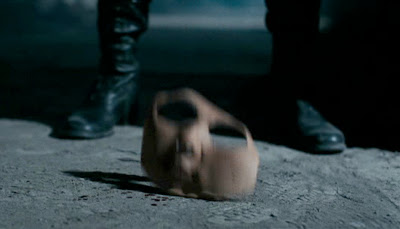 That right there is why this movie was made. The whole girl-on-dead girl-on-dead girl schtick that preceded it was just bonus. It's all about the DFS (Drooping Face Syndrome)! This scene was made from love! Love and rainbows and rainbow sprinkles smothered in chocolate sauce.

I didn't really get why this killed Hot Tough Chick - I mean, he just carved her face off; a couple of band-aids would fix that right up - but the boyfriend says she probably dropped dead from fright, which I guess it what this next shot is supposed to be: 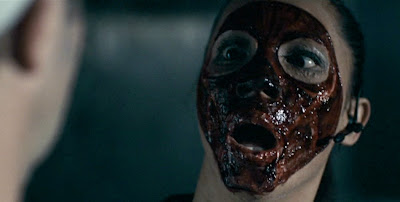 Humina humina indeed! Not that it matters. Not that any of it matters! You've seen all you need to see here, my friends. Now forget this movie even exists. Rent the original remake (that phrase - original remake - is designed to make my brain explode). It was way better than this dreck. For one, it had Famke "Kicks Ass, Takes Names" Janssen slurring her way into High Camp Heaven. And that, my loves, beats a bloated Eric Palladino any day.

You awesome, disturbing bastard. YOU ARE GOD!

Is it wrong that I actually want to watch this scene now?

"Yes. The horror! And, shockingly, not so sexy anymore."

I knew some sicko would chime in with such a notion!

I'm glad you're my sicko, Steven.