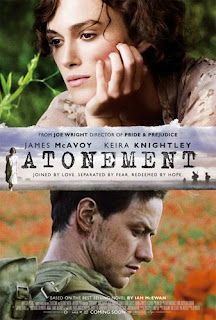 This is going to be quick because work's going to be nightmarishly busy today and I have to get on it before it all builds to a hellish crescendo in the afternoon, but I do feel the need to get this out whilst fresh on my brain: I saw Atonement last night and... hmm. A beautiful, beautiful movie. Really lovely to behold.
But I mean that in the eye-catching sense. Cuz... well, I found it hopelessly empty. I never felt as if I was watching real, living, breathing people. I felt like I was watching art-direction. James McAvoy and the two younger Brionys certainly tried their damndest to make me care, and I give them props for supporting their paper-thin characters with some very fine, if briefly realized, work. But... the entire story was easily condensed into the trailer. I had never read the book, and there was nothing, plot-wise, that surprised me, involved me, beyond what I knew from the trailer. And instead of filling up the running time with, I dunno, more character development, we got a run of, again, very very pretty images that, for me, added up to a lot of pretty images that never got around to affecting me on an emotional level.

Keira... well, director Joe Wright certainly loves her anorexic-bulldog's face, don't he? Listen, I have much less against Keira than I'd like to in theory: I thought she was fantastic in Pride & Prejudice and the only person doing anything interesting in the second Pirates film (haven't seen the 3rd yet). But here she was window dressing. Great-to-gaze-upon window dressing, sure. But I never felt like this was a real girl here.

I am glad I saw it on the big screen. Hell, that extended shot on the war-ravaged beach was worth the price of admission. And I found myself pulled even more under the spell of those ginormous blue orbs James McAvoy calls eyes. But devastating? Hardly. And that last act reveal, that (spoiler) all the actual romance we've seen has been filled in by Briony's imagination as she tells their tale only served to make me even more detached from any emotional investment I might've had. Sure, their "truth," that they never were given their moment together, is heart-breaking, or might've been if I thought of these characters as people. Instead I found it as meaningful as that suddenly revealed hole in James McAvoy's chest (i.e. heart, i.e. subtle, that) - an image, divorced from its human implications but lit by a really lovingly captured sunrise.
.
Who? Jason Adams When? 9:26 AM

So does this mean that I do get burned in effigy? Or merely scalded with very hot water?

Aww, I didn't hate it. Like I said, it really was pretty to look at and I'm glad I got to see the swirl of lights and colors on the big screen. And what I did write above sounds harsher than it should've. I was just expressing my doubts about it being a GREAT film. It's an okay film, in my ever so humble opinion. ;-)

It deserves all sorts of awards for the technical stuff - costumes, cinematography, so on. I just... you know, Joe, I've told you, how easily I can get... let's just say "emotional"... but Atonement never got me. I liked to look at it, but I just felt like it was a bunch of people moving from one really lovely shot to another.

Blah blah blah. No scalding for you, Joe. You're okay on this one.

It was ridiculously beautiful to watch, I agree. I'm so envious of the green dress and the pretty, pretty English countryside. The last third of it bored me, though. And honestly, if a movie is going to be that depressing at the end, I wish we could have seen a teeny tiny bit of joy, somewhere, anywhere. (SPOILER, I guess) Sex scenes don't count.

How was Vanessa Redgrave?

She was fine. She has like one scene. I'm honestly not a huge fan of hers, she's got these actorly twitches that kinda get on my nerves. She kept it relatively fidget-free though. I thought it was ridiculous that the character was supposed to have the same haircut for her entire life, though. We got it: she supposed to be Briany, they're calling her Briany, there's no need to have the same haircut on her.

My critics of Atonement:

The Great:
*Brionys: The three actresses are great in general aspects. I love Saorsie Ronan, I very like Vanessa Redgrave and I like Romola GArai (I don't understand the critics about Gaai, if she's better in a thousand ways that the "skeletor body")
*Art Direction: Beautiful and marvelous.
*Score: Fanatstic and original score by Marianelli, The only real Oscar for Atonement

The good:
*James McAvoy: His performance is good, but not great. Sorry, but I think Emile Hirsch, Ryan Gosling, Brad Pitt, Sam Riley and even Tommy Lee Jones deserves the nomination than him
*The script: Good script, especially the first thirty, but very cold and little bit pretensous and overacted.

The Bad:
*Directing: Unexpected and pretensous
*Skelletor body: You know her. That's corroborates my theory. She has only fantastic performance "Pride and prejudice". One of the most overacted and mediocre young actresses I even see now.
*