I always knew, in my black heart of hearts, that the whole "Patty Clarkson will play Mrs. Voorhees" rumor would likely never come to pass. I mean, sure, Patty's shown herself to be perfectly willing to dive into low-budget horror in the past - she did Larry Fessenden's Wendigo and Lucky McKee's The Woods, after all - so perhaps if the stars aligned it could've maybe happened, but I think at this point we can agree it's not to be.
Especially now with word from ShockTilYouDrop that the latest Friday the 13th - to be directed by TCM-remake-auteur Marcus Nispel - is not really a remake after all. Sayeth STYD:

"Platinum Dunes' Friday the 13th project. What do you label it? Remake? Re-launch?

After speaking to a source close to the project who wishes to stay outside of the spotlight (for now), we're striking the former term out of future reports on the film.

Well there's already something "between parts two and four" and it's called Friday the 13th : Part III and it's in 3-D and it's awesome. Eyeballs a'poppin! 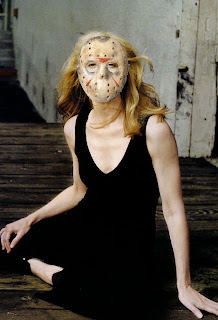 This whole "leaner, meaner, faster" nonsense is giving me Rob Zombie's Halloween inspired shivers, too. Jason's about the quick slice-n-dice, the slow lumbering build-up and the jump scare; he's not about seventeen-minute long torture scenes. Let's hope they remember the spirit of fun inherent to the series - these were never ever meant to be taken at any level of seriousness - and don't make it an ugly mess.

Maybe there's a juicy older camp counselor part for Patty? Or she could always don the mask and overalls! She'd certainly make for a leaner Jason!
.
Who? Jason Adams When? 11:09 AM

Ummmm, unless my memory is failing me, as it admittedly does on occasion, parts 2, 3, and 4 took place over the course of just a couple of plot days. The store owners in 3 are watching news coverage of what just happened in 2 before they get offed, and 4 begins with Jason at the morgue after the events of 3. What else happened in between pray tell? Did Jason also have time to pen a book of haiku, enter and win a hotdog eating contest, and try out for "Deal or No Deal" (now there's an episode of that insipid "gameshow" I'd actually watch...). He's talented, but killing 30 people over the course of 3 days or so is bound to leave one with little time for extracurriculars....

And that's a great memory you've got there, shaun; I'd spaced on the fact that the three movies were so closely connected time-wise.

Jason would kick ass at a hot-dot-eating contest. He's so riddled with holes they'd just spill out as he continued devouring them.