Using a scene from the Final Destination oeuvre for this series always feels like a cheat beforehand; I mean, the movies are nothing but minimal story stringing together ingenious bloodbath after ingenious bloodbath, so it's gotta be easy, right? Just pick a death, any death. But then I think about it and realize - how do I boil these deaths down to their essence? How do I find a simple phrase to capture the wonderful Rube Goldbergian proportions of all the dominoes set in place to get us to that end? Take my favorite death from the entire series - from Final Destination 2 to be exact. It starts with a simple tire blow-out: 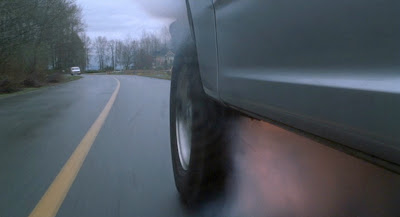 The SUV filled with our constantly-in-peril "characters" careens off the road into a field, where they crash through bales of hay and a wooden fence that sends a pole through the driver's side door, pinning the driver to her seat: 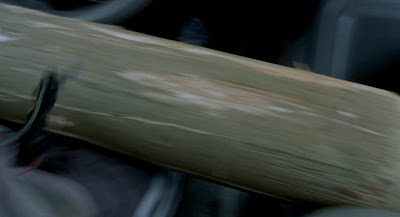 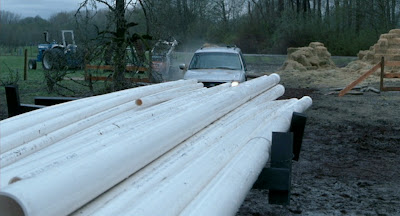 Which shoot through the back of the crashing SUV: 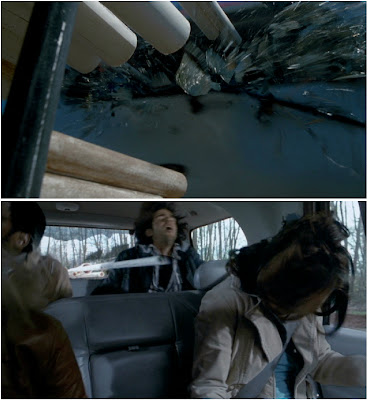 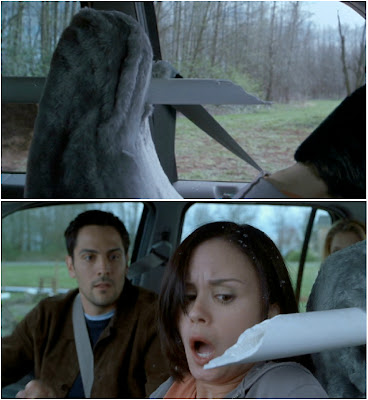 But everybody's okay! That pipe went through the driver's seat but was a near miss; phew! Our driver is stuck in the car, though, because of that gosh-darned log pinning her legs down: 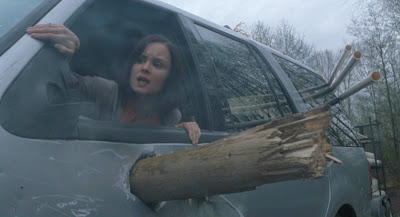 Thankfully helps arrives to save the day and get her out with the jaws of life:


Oh whoops, forgot about the airbag (not to mention that shattered PVC pipe right behind her head...): 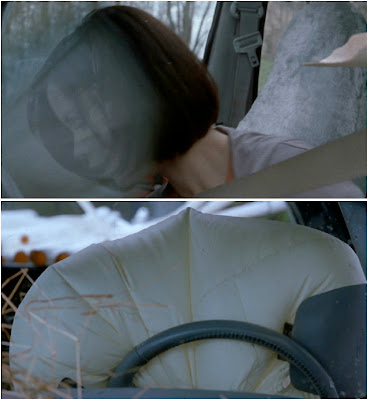 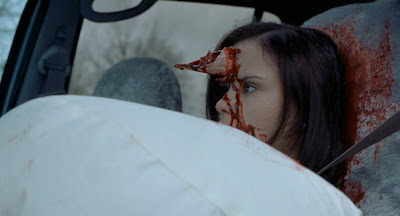 See what I mean? Impossible to capture the devious ingenuity of the scene in a single phrase ("Bitten By The Jaws of Life"? "PVC Pile-On"?) or couple of screen-grabs. So, simple? Notsomuch. Delightfully twisted? Oh indeed; in spades!

For more of this series, click here, punishment gluttons.
.
Who? Jason Adams When? 11:58 AM

Man, are those movies fun or what?

There are proof the pics are there, but for me NONE of them are loading. :(

I gotta say, I'm a fan of the tanning bed deaths for the use of Rollercoaster of Love alone

I don't know what Blogger's problem is today, JD, but it's being a total [fill in the expletive]; the pics took forever for me to even load this morning, then they were there, and now they're not showing up for me either. I don't know. Maybe they'll reappear or something. Sigh.

rj, I have to watch Part 3 again some time soon, I haven't watched it since the DVD came out. Some great deaths there too.

I love these movies, and this death was certainly one of the highlights! Took me completely by surprise.

Clearly this is death by jaws of life? Didn't think you were giving FD movies the love they deserved. Change of heart? Guilt? A tumbling of the stack of cards you call taste and judgment?
This would clearly be in my top horror films.

As I said when you made the trapped in a tanning bed one of the very first Ways Not to Die you could fill your entire series with just Final Destination deaths. But the trick is to find the very best ones. This death scene was quite ingenius.

The disaster on the highway at the start of number 2 is my favourite scene from any of the films.

I haven't seen the third, but my favourite from the first two is definetly the kid getting crushed by a pane of glass. It's because, if you slow it down, you can see that the glass didn't just knock him down or anything. For whatever reason, the glass basically turns his body to mush as it descends. Then when we see the body bag, it's really flat, except for two lumps which were probably supposed to be his feet, the only bits of him left for them to collect.