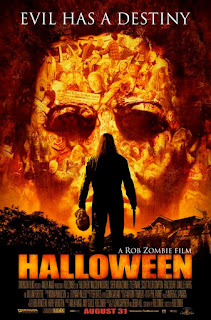 Somehow, I'm not sure how I missed it, but it completely escaped my attention that Rob Zombie has got a remake of John Carpenter's schlock-terpiece Halloween coming out this weekend. I know, I usually could care less about horror movies - eww, violence! - but John Carpenter's film is such a dud that this makes total sense. I mean... come on! Ooo, some big masked man butchering babysitters! I've never heard that one before. And he - this is almost too laughable to even mention - puts a sheet over his head with glasses on the outside! Scary! Anyway, if any movie out there needed a remake (though I think the time has come for Michael Bay's Fanny & Alexander, don't y'all?) it is Halloween. Here are five reasons why it's the greatest idea ever.
1. Rob Zombie is just the dude to take the over-the-top silliness of Carpenter's so-called "vision" and streamline it. He knows subtlety; he knows nuance. He knows how to create suspense and not hit you over the head with crass violence and constant allusions to other movies. Basically, where Hitchcock tread, Zombie follows.

2. Anybody's a better choice for a lead than Jaime Lee Curtis. Talk about nepotism! What did she ever bring to the horror genre? Zilch, that's what. But the girl who played "Fairy" in seven episodes of the television classic Charmed already has me excited. What skills did she learn under the wing of the Spelling dynasty? I can't wait to find out!

3. One of the biggest oversights in the original film was Carpenter didn't give us a reason. He didn't explain why Michael Myers was the way he was, except for some perfunctory nonsense. What we really need is 2/3rds of the film to be about Michael's past. Forget all that "throwing us right into the story" malarkey! I want a good, stiff hour of exposition! What was the scariest part of Psycho? That's right - the last couple of minutes with the psychologist telling us what was going on in the head of Norman Bates. If only Hitchcock had been smart enough to give us scenes of Norman's childhood! I think I've figured out what Zombie's next picture needs to be! 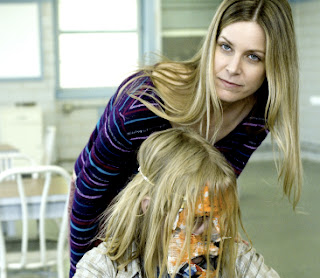 4. One can really never have enough Sheri Moon Zombie. Why does she seem to only appear in her husband's films? I find it hard to believe that no one else would hire this magnificent actress. I smell Oscar!

5. Hopefully this will start a trend of remaking all these so-called classics. I'm so sick and tired of people arguing that we should go back and watch the originals. Um, for what? They're old. Why don't I just go sit around a campfire or listen to my grandparents' stories or read a book, O Wise Ones? Oh that's right - cuz Hollwood is throwing bunches of money at these modern-day geniuses for a reason! What, am I supposed to believe that money is the only thing Hollywood cares about? It's about the art, man. Rob Zombie knows what the world is like today, and will make this relevant to the things I know and care about. He's got his finger on the pulse! 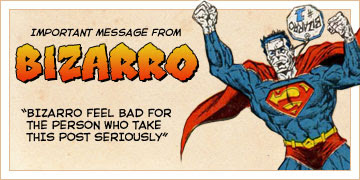 Check out the Bizarro Blog-a-Thon
going on via Lazy Eye Theatre!

This is hilarious (though I'll admit I was April Fooled for a second there).

I've always loved that the first time that I watched Halloween, I was babysitting (so scary!)

And the Michael Bay's Fanny and Alexander-there's a truly terrifying thought.

Be careful. Somewhere in Hollywood, a studio executive is reading this, never bothering to see #6, and is thinking "Yes...yesssss...this guy actually gets it..."

This was soooo hard to type. I need to take a shower. Shudder.

I feel your pain. I really do.

but this was spot-on.

what's so sad is we hear comments like the ones you're lampooning here ALL THE TIME.

re: classics. ewww. they're old!

first time I saw Halloween was actually only three years ago. My friend loves it and he demanded I watch it at like 2 AM with her or something and I have to tell you: scared the bejeezus out of me. especially because it's scares were so damn calmly presented.

Seriously, I'm having some nightmares about the idea of Michael Bay remaking a Bergman classic-it's like that time Bennifer was considering redoing Casablanca. I know it's a joke, but still-shudder.

This post is a revelation. All this time, I was preparing myself for a final confrontation with Rob Zombie that would end in a bloodbath and one of us dismembered and twitching spasmodically.

Then, you wrote this and convinced me that Zombie has the right idea.

I will now forward this entry to every studio executive in Hollywood in a desperate attempt to get "Citizen Kane" remade by Michael Bay.

I actually like Sheri Moon Zombie. Is that wrong of me? I thought she was a hoot in The Devil's Rejects.

I was so busy last night that I missed this. Too fucking funny! I doubt anyone here needed the disclaimer, but like the others said, I'll bet there are suits who would not get it. Well done!

Glenn - I was crueler to Sheri Moon than I meant to be; I don't loathe her and agree, she was fun in TDR. The sarcasm was kind of addictive once I got going with this post, though.

I loved Sherie Moon Zombie in TDR, but her fake-ish annoying laugh in 1000 Corpses got on my last freakin' nerve.

I'm keeping my expectations very very low for Halloween (or, as my friends and I are calling it, "Michael Myers: The True Hollywood Story") and hoping to be pleasantly surprised.