Because of my week-long picnic in Haight-Ashbury (no need to ask; yes, I will have flowers in my hair), I'm very sadly not gonna be around to actively participate on June 12th when Nat at The Film Experience holds his Action Heroine Blog-a-Thon.
But in the spirit of celebrating the Brawny Ladies of War (I heart acronyms) a little early, I thought I'd highlight the Other Action Heroine in Jimmy Cameron's tender ode to the yearnings of the heart skull-fucking face-hugger-filled bitch-bomb of an action flick, Aliens.

In my humble opinion, The Greatest Action Heroine of All-Time is in Aliens, in the form of Sigourney Weaver's Ripley of course, but because Cameron loves the ladies he makes room for another, even harder-assed (more on that brave comment in a sec) chick in the form of Private Vasquez, played to the butch-hilt by Jenette Goldstein. 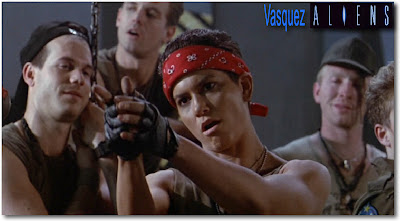 (As a sidenote, the last time Nat held a blog-a-thon, that Vampire one, I ruminated on Bill Paxton in Near Dark... and Aliens is of course a weird companion piece to Near Dark, with Paxton and Goldstein playing characters in both films, in the askew universe populated by off-screen collaborators Cameron and Kathryn Bigelow. If I do something on Michael Beihn at the next blog-a-thon, whatever it may be, then we'll know I have a problem.)
Anyway, that's right, I said it: Private Vasquez is more of a hard-ass than Ellen "I define the words 'hard-ass'" Ripley. But this hard-ass-osity is, of course, the reason for Vasquez' ultimate downfall: because what is Aliens about if not... everybody now... "Mommy." The film's final confrontation, between Ripley and the Queen Alien ("Get away from her, you bitch") is like watching two lionesses tearing out chunks of each other's necks in front of their respective babies; it's a primal scream of Protective Motherhood.

To bring that back to Vasquez, can you picture her taking on the role of nurturing mother figure to lil' Newt? Vasquez' biceps would strangle to life out of that little girl. Ripley's able to

mix the motherly with the tough, the soft and the hard, but Vasquez, in the grand tradition of the uber-butch, perhaps (though from what I remember never explicitly stated to be) lesbian women in cinema, is another one of the guys. I mean, she's bar-none the toughest one of the guys, for sure, and she goes out gallantly, temporarily stopping the alien onslaught by sacrificing herself. But yes, she must indeed be sacrificed within this tradition so the ever-so-slightly more feminine, mother-capable Ripley version of femaleness can come out the victor. Only later would Cameron make the "Mother" figure scary-tough, with Sarah Connor in T2. Ripley, for all her toughness, doesn't pick up the "scary" reins til after Vasquez is out of the picture.

Nonetheless, even if Vasquez never wins Mother of the Year honors, she's locked and loaded and she will rip a hole through your motherfuckin' chest if need be, and that's pretty nifty too.
.
Who? Jason Adams When? 12:30 PM

My favorite movie of all the time

I agree with all except the lesbian part. Vasquez and Drake were definitely "working out" together in their spare time. Her reaction when he's killed is totally in line with a woman who is in love with a man.

Yep, Vasquez could definitely kick ass with the best of them. The best character in tbe whole Aliens franchise. I agree with the other comment--Vasquez is no lesbian. She and Drake definitely had something going on there, much more than 'just friends'. Lovers for sure.

It's really interesting, but the whole "Vasquez--is she or isn't she?" debate is just another demonstration of what an amazing job of characterization Cameron did. I've been involved in conversations where people make very legit cases for both sides of the argument. There's the "Vasquez and Drake are lovers" possibility--BUT she then does the same hand-clenching thing with the officer right at the end before they're both killed--and she's hardly in love with him. There's Hudson's joke about her ever being mistaken for a man (and her great comeback, "No, have you?") There's the jacked arms, the short hair--but again, what's great about it is, in the end, that it's left ambiguous. Personally, I kind've like the thought that she is a dyke, that one of the toughest Marines in the history of cinema might be a gay woman. That's just radical. : )

To those who can't wrap their minds around Vasquez being a butch lesbian...can you say "denial"? Her relationship with Drake and the guys is one of brothers-in-arms camaraderie. Plus, she eyeballed Ripley early in the movie and said appreciatively, "Qué bonita!" That character was a strong, gallant butch lesbian. Oh yeah.