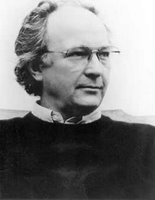 Author of the His Dark Materials trilogy, Phillip Pullman, recently visited the set of the now-filming adaptation of the first book, The Golden Compass, and has written about the visit at his site.

"The film of The Golden Compass is progressing very well. I spent yesterday at the studios in Shepperton, meeting some of the cast, including Sam Elliott, who's playing Lee Scoresby. Sam's resemblance to the Lee in my mind is just astonishing. His Lee has all the presence, the experience, the battered integrity, the humour, and the courage of the aeronaut who first walked into my story thirteen years ago. I can`t imagine a better cast, and the sets and costumes are just astounding. They were filming the scene where Lyra approaches Iorek Byrnison at the gyptian camp and asks him to take her to the village near the lake, because the alethiometer has told her that there`s something she needs to see there. Dakota had to speak to the empty air, because Iorek, of course, is being constructed pixel by pixel in a computer somewhere; but his voice is provided by Nonso Anozie, and a better bear you`d have to go a long way to find.

The set was constructed inside a vast sound stage, a building bigger than many aircraft hangars, and going all the way around the inside walls, from floor to distant ceiling, there was a truly enormous canvas painted with an Arctic panorama of icy mountains under a dark sky. The gyptian encampment was set up among great blocks of ice and snowdrifts - very convincing snow it was too - the tents and the firelight looking wonderfully real.

I saw the scene that had been filmed the previous day: Iorek at Trollesund charging out of the house having regained his armour, and Lyra ordering him not to kill anyone, and Lee stepping in to prevent mayhem. When you see all the several takes of the same scene, and then see many more from different angles, you really get the sense of how films are made in tiny pieces, like making each stone in a mosaic separately.
And you see how much of the work is going to be done later at the editing stage, just as it is with a novel.

Later I visited the Trollesund set. It`s unbelievably real. You`d swear these grimy battered houses had stood there for a hundred years or more; and then you walk round the back and see the raw new unpainted wood behind, the props holding it up, the weights holding it down.

And I haven't even mentioned the costumes. I can`t go on speaking in superlatives, but it all looks better than I would have thought possible.

In short, I think it`s going to be - at the very least - spectacular."

He's happy, I'm happy, now I just need to put myself into a sleep-chamber and set the timer for this thing's opening weekend.
.
Who? Jason Adams When? 9:43 AM
Labels: His Dark Materials