Heath As The Joker? 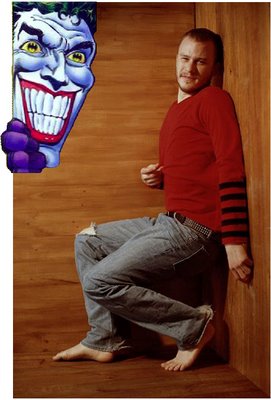 I think Ledger's a fantastic choice (I was terrified that the rumors of Robin Williams would come to pass) for the Joker in the Batman Begins sequel. Latino Review broke the casting of Brandon Routh as Superman, so they can maybe be trusted on this one:

"For months, gossip has been circulating who would play The Joker in the next Batman Begins sequel. It's definite that the next sequel will concentrate on The Joker and they're already throwing names around such as Steve Buscemi - Robin Williams - Lachy Hulme -Alexis Denisof – and Mark Hamill.

We were first to tell the world that Brandon Routh was going to be the new Superman. Now here we are at it again as we just got word from A VERY TRUSTED SOURCE that the offer last night was officially made to Heath Ledger to star as The Joker in the Batman Begins Sequel! As Ari Gold on HBO'S Entourage would say: Heath Motherfuckin' Brokeback The Joker Ledger!"

Sure, Ledger's a little bit young, but I think we know where I stand on the man's acting abilities.
...
Who? Jason Adams When? 11:38 AM

He's definitely got the big giant grin for it!