//////////
A few days early (buy those flowers, kiddies!) and in honor of everyone's favorite womb-bearer's holiday, I doth present: 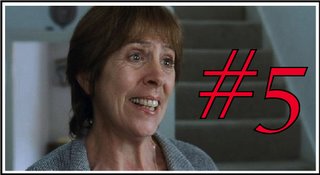 Aww. Poor Shaun's Mom. She only wanted to be a good and helpful mother. She only wanted to feed and love her son. Maybe she did coddle him a little too much. Maybe it was somewhat her fault that he'd become such a bore. And yeah, maybe she did marry a complete ass. Oh, and then that part where she DIDN'T TELL ANYONE SHE'D BEEN BITTEN BECAUSE SHE DIDN'T WANT TO BE A BOTHER. Damn, woman. 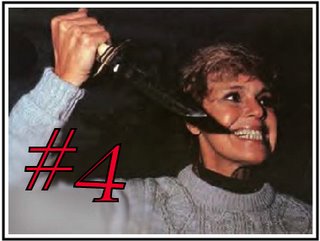 Now this is a mother who loves her son. One that's willing to chop, slice, mangle and mutilate people in his name. Sure, those people never actually had anything to do with her son's death, per se, but it was more of a symbolic thing. What's a mother's love got to do with the facts, anyway???

Marge Thompson (Ronee Blakely), A Nightmare on Elm Street - click on that image for a wonderful comic strip of death!

Marge is quite possibly my favorite mother in all of filmic history. Every time we see her, she's sneaking a bottle of liquor out of some random household place - from under the sink, from under the bath towels. And not only is she a stupid drunk, she (along with the other neighborhood parents) was responsible for making ol' Freddy Kreuger the horror he becomes. Good one, Marge! Now, force your daughter to sleep some more why don't ya? 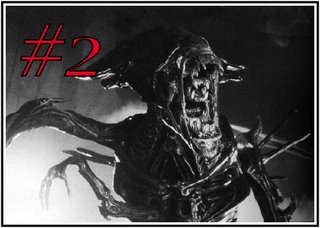 The biggest (almost), baddest (almost) mother of them all (almost). You don't wanna mess with her eggs. Or what's inside of the eggs. Or what's inside what's inside the eggs. A slew of academic papers and film criticism has been written about this film and "Motherhood", but it really just comes down to this: Mothers are protective. Sure, Sigourney kicks our Queen's ass in the end, but she cheats with that big space suit thing. Mano a mano, Ripley didn't stand a bitch's chance. 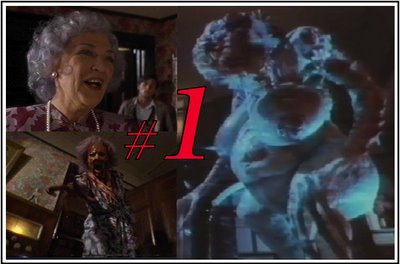 Mum (Elizabeth Cosgrove), Dead Alive (aka Braindead) - It really doesn't get more fucked up than dead old Mum. Just thinking about her... transformation... gives me the willies. Let's see, how about that time she serves custard filled with... oh goodness. For those of you out there with weak stomachs, I'll refrain from describing just what's in the custard. Then how about when she mutates into a deformed zombie giantess with a pregnant-belly-mouth that tries to devour her son? Good times. Peter Jackson really outdoes anyone who's ever tried to mess with the concept of motherhood here. Above and beyond the call of duty, Pete! Way above and wayyyyy beyond.

Now I know there are hundreds of other examples... one of horror's favorite pasttimes is messing with motherhood. These are just the ones that sprung right to mind. Any suggestions of your own?
////////
Who? Jason Adams When? 2:33 PM

Penelope Wilton is my new favorite go-to plucky English woman of a certain age. She is also featured in Matchpoint and in two episodes of the new Doctor Who.