Mistress of the Dark

Nathaniel R over at Film Experience has dubbed today and tomorrow - well, every day if you're as Pfeiffer-inclined as he - not that there's anything wrong with that ;-) - a celebration of all things Pfieffer.

I happily comply. (as are many, many others)

When I think of Michelle Pfieffer, I think of an almost unholy beauty - inhuman, sharp... it hurts me sometimes to look at her. I remember Roger Ebert saying, I think in reference to her 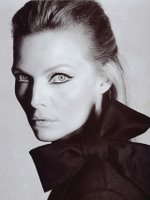 in Frankie & Johnny (so, yes, as a criticism of her there - Michelle? A waitress???), that both she and Geena Davis - whom he's referred to more than once as a Valkyrie - are too beautiful to be completely believed as actual, real human beings; that they exist on a totally different realm. Pfeiffer reminds me of that moment you first see Grace Kelly in Rear Window - the room is dark, Jimmy Stewart is asleep, and her face pops out of the blackness coming straight at the camera, lips parting, and every single damn time I see it I gasp for air. Looking at Michelle Pfeiffer is like that every time; with every single shift of light, from frame to frame, a new angle appears and I find my breath emptying out of my body. She makes me understand what it would mean to be a heterosexual man, in unsubtle terms.

But it's a beauty that is, like that of so many of the best film stars, imperfect - in fact, it's the imperfections that add up to something altogether better; more perfect, if you will. Her lips can be strange creatures, seemingly acting on their own, catching on themselves; her eyes... well, it's her eyes that do it, too far apart on her head, resting on those... cheekbones... they signal danger, of the playful sort, like when a lioness is batting around its wounded prey for fun. 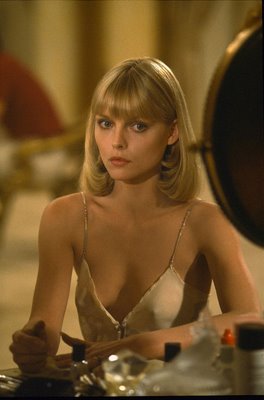 Nate's right when he says that Michelle Pfeiffer in Scarface is still not quite Michelle Pfeiffer. She's too young, her face has yet to be carved into the sharp corners that will make her so striking just a few years later. But... she's well on her way. What surprised me, watching Scarface last night for the first time was how little Pfeiffer's in it - she gets maybe twenty minutes of screentime at most, and disappears for the final act - but what an impression she does make, and what a loss her presence is at the end.

When we first see Elvira, her back is to us as she glides slowly down the wall of her kingpin boyfriend's livingroom in a glass elevator that resembles nothing short of a Barbie case. And from there on out, we, like Tony Montana (Al Pacino), can look at nothing else when she's there.

Nate makes an apt case for the animalistic charms of Pfeiffer, and for her next prominant role in Ladyhawke as a bird-woman, and here she is also birdlike - when she and Tony dance together the night they meet he pointedly remarks that her last name - Hancock - sounds like a bird. But in contrast to the wild bird she is in Ladyhawke, Elvira is trapped in a gilded cage of her own making. Whether it be the drug addiction or Elvira's self-destructive insecurities, not until her final scene does she seem to realize the life she's herself in to is not the one she wants. I'd say she genuinely loves Tony, as he does her, and in his own twisted way he frees her from her cage, making it possible for her to leave. He tells her, in his own piggish way, that she should do something with herself; that lounging around doing coke and waiting for him to fuck her are no way to live one's life. In her final scene, when she tells him she's leaving him, she tells Tony, "Can't you see what we're becoming, Tony? We're losers. We're not winners, we're losers." She, luckily, finds the foresight to escape before the entire cage comes crumbling down around them all.

And even though Pfeiffer's role is smaller than I imagined it to be, I think my boyfriend's claim that every "coke-whore wife" role that followed, from Sharon Stone in Casino to Penelope Cruz in Blow, does owe Pfeiffer's Elvira an immense debt. Once Elvira is pulled from her spot as Tony's crown jewel, the epitome of what stood for his American Success Story, he could do nothing but fail, and his kingdom came toppling down.

And isn't that the case with all of us? Once we lose our Pfeiffer-fix, isn't just a matter of time before we're all face-diving into a mountain of cocaine and being shotgunned in the back? Thank God she's back on screen in a couple of months!

There are a slew - a mountain of coke's worth, one could say - of other people posting about Pfeiffer today, you can find all the links here.

omg. i love u
this post got me so cranked up that i feel like diving into a mountain of coke myself. should i start frothing at the mouth like Uma Thurman in Pulp Fiction, consider it your own fault

I wish I could think of something horrible to say about Michelle that I could equate to a hypodermic needle to your chest, then... but I'm coming up blank. I really do like her that much. What if I suggest she's probably had some work done? Granted, by a REALLY FUCKING GOOD surgeon. Sorry, I just don't really want to be responsible for that whole "foaming at the mouth" thing, you've driven me to desperate measures!