I haven't written about the movies I've seen lately in awhile. To be honest, it hasn't only been that I've been distracted by current events; I just haven't had much to say about the movies I have seen. Nothing's blown me away, and nothing's horribly offended me.

But here's a rundown of what I've seen lately anyway, and some brief thoughts, in case you're wondering.

Grizzly Man wasn't high on my list of must-see's. I saw it for the boyfriend (instead of Junebug, which I'm still aching to see). At first I didn't want to see the film at all, because I wasn't keen on watching a real-life snuff film, but when I learned that you don't see or hear the actual footage of Grizzly-enthusiast Timothy Treadwell getting, well, snuffed, I changed my mind.

Let me just tell you something: Timothy Treadwell was an ass. Also, possibly completely out of his mind. Luckily, the film knows this, and shows this. I'm not going to say he deserved to die, but he was bound to eventually, and his luck just ran out. What most impressed me about the film was it's structure; it's edited in this sort of circular manner that keeps rounding back on itself so you see different levels of this nutcase. It's not linear, you learn very early on how it's going to end (though most people probably know before even entering the theater), and so instead it's a rumination on what would drive a man to live most of his life mere feet from creatures that could murder him at any moment. It is a fascinating film.

I think Broken Flowers is a movie I'll love after a couple viewings. Bill Murray can just keep doing exactly what he's been doing for ten more movies, I don't care about the criticism that he's played the same role three times in a row now - it works. Really, really well. Though I need to see both films again before I judge this for sure, I think I might've liked BF more than The Life Aquatic. Everyone else here, from Sharon Stone (!!!) to Jessica Lange to Tilda Swinton to Frances Conroy to Jeffrey Wright, is great. I was a little frustrated with the end, but it's grown on me since.

The boyfriend and I really disagreed on The Constant Gardener. I thought it was terrific, and he... did not. Coming out of the movie he actually called it a "disaster", which I had to remind him that in the wake of Michael Bay's The Island he had no call for throwing that word around lightly. He loved Meirelles' last film, City of God, which I did not, so maybe there's some sort of ying/yang thing here.

This film was much more about a straightforward plot (though it's presented to us in anything but a straightforward manner) than CoG was - it's got an engine of solving a single mystery built into it, unlike CoG which was much more about showing us a specific world. Anyway, the two leads, Feinnes and Weisz, give great performances (I've grown especially fond of Weisz - she plays brains well). It's also a beautiful film, with an astonishing use of color.

So those are what I've seen in the theaters lately. I liked all three films very much, and they're all worth seeing. Here are the last couple movies I've watched on DVD: 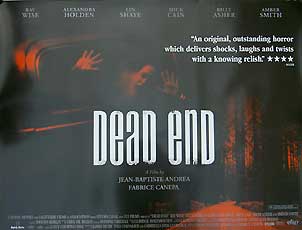 Dead End surprised me. I'd not heard anything about it until NetFlix recommended it, but it's really worth catching if you stumble across it. What I liked about it is how... simple it all ends up being. I was expecting some outlandish explanation for everything that would be silly and overwhelm everything that came before it, but the film has a definite tone, keeps it going, and resolves itself simply and effectively. It's solid the whole way through. Not to mention really darkly funny at times. An entertaining genre exercise - it plays like a slightly longer episode of The Twilight Zone.

There were pieces of Crash that I really liked. I liked the Hispanic guy a lot. I wish I could remember his character's name so I could figure out the actor's name so I could call him something other than "the Hispanic guy." But then I think that writer/director Paul Haggis probably conceived of the characters as "the Hispanic guy" and "the Arab" and "the thugs" himself, since the movie often plays as nothing more than a show-offy "Lookee here! I'm saying things everyone's 'afraid' to say! That makes it true!" kinda exercise.

That said, there were good pieces, pieces where I didn't feel like Haggis was stabbing me in the face with his so-called daring - "the Hispanic guy" was one of them, and the other was "The White Bitch Played By Sandra Bullock, America's Momentary Sweetheart Now Showing Her Range"'s story. What can I say, I teared up at Bullock's final scene with her maid.

But otherwise, I just kept feeling like he was saying lots and lots of not much. This guy's a racist, but he has a sick dad! That gal's sick of being stereotyped, but she does it too! Get it guys? We're all racists! Sigh.
Who? Jason Adams When? 2:50 PM