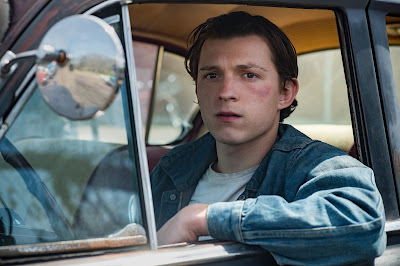 Antonio Campos new film The Devil All the Time (out on Netflix today) is a heckuva big meal -- a feast, really. Based on the 2011 novel by Donald Ray Pollock and narrated by him too, it feels it -- novelistic, I mean. Each scene -- and the space between them especially -- hums with the breeze of a dozen pages flapping in front of your face, introducing another character, another angle on this small brutal town and its small brutal inhabitants; nobody can just sit and eat a pie like Rooney mara in A Ghost Story in The Devil All the Time; it's right there in the title! All the time! Not just a little bit of the time, some devil.

And like a feast you get too much of some good things and not enough of others. I complained earlier this week about not getting enough Mia Wasikowska -- the same is very nearly true of all the female characters, save Eliza Scanlen and maybe Riley Keough, although the latter's character remains a festering question mark. Which is okay -- most of these people don't seem to know themselves (who does) and a movie that knows that isn't not doing its job. It knows better. 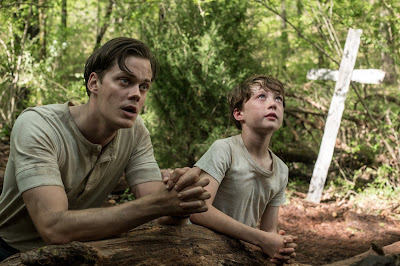 I'm surprised to see that Pollock's book (which I have not read) only runs three hundred pages because given everything packed into this film's two-ish hours I could've easily seen the book busting out into twice or thrice that territory. Even as a feast it's the rare occasion of a Netflix thing being maybe not being enough, maybe leaving us wanting -- might this have been better as a miniseries? I could've stood another hour, actually sat with these folks, gotten to know 'em a little better. Maybe made and eaten a pie or two.

That said everybody's wrestling with their own gods in their own ways, and some of the dishes began to seem redundant, piled on top of each other as they are -- so many fishy preachers, all to the same ends. If you want me to see generations falling under the spider-faced spells of the same madness I need to feel the time pass a little better, otherwise it begins to blend, a pile-up of flavors and Robert Pattinson Accent taste sensations -- I just wanna savor the ham, Antonio Campos! Let me savor Rob's ham!

My main complaint, which is only half a complaint, is everybody's doing good work here -- I believed in this place, even as it stuffed itself to the gills with gothic melodrama, and I wanted to spend more time in here rifling around. I wanted some patience, a slow burn, but I got a loping forest fire instead. I'm sure Pollock could've told everybody involved if you let a fire breathe, give it some oxygen, it'll light up even prettier. He seems the type to know. 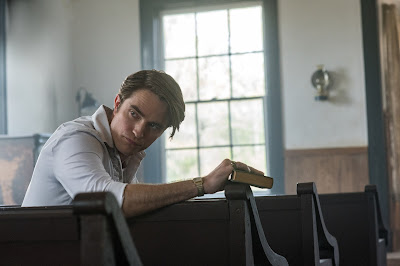