Beneath The Beneath... Is More Beneath 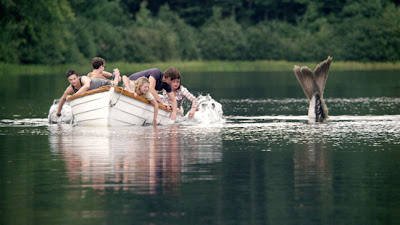 So when you watch something that's on the surface (ha get it) so eye- and mind- and soul-boggingly inept as Catfish Catastrophe, you can't help but wonder... and I'm pretty sure he wants us to, even starting with that seemingly generic title, promising hidden depths. But they're so so hidden, you guys. 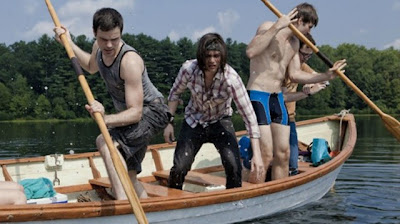 Let's take it at face-value for a moment. I'll review it as if it were made by somebody else. What we have here is half a dozen douche-bags who absolutely cannot stand each other pretending to be best friends and heading out on an inexplicable trip onto a dreary brown puddle for One Last Party Before College. One of them knows there is a giant person-swallowing monster fish in the water, but doesn't tell anybody. They get to the middle of the lake and are promptly attacked, and in an epically Godot-ian displacement of time and space and logic they become stuck in the middle of the lake - no matter how much they paddle frantically they never get any closer to the shore which is always well within view. Every time they get a little bit closer they toss somebody else overboard to distract the fish, and then they stand there and stare for awhile instead of rowing, and then I guess they paddle away from the shore because five minutes later they've gotten no closer to anything, and have to repeat the entire process.

The actors speak their lines as if they've been translated back and forth through several randomly chosen iterations of Babelfish (ha get it) and their scripts were written with either absolutely no punctuation or a period and an exclamation point at the end of every single word, I can't tell which. They were apparently kept in solitary confinement for a year before filming, so fundamental is their inability to relate to another human being standing beside them. The character's relationships to each other are absurd to the point of incredulity - why any of these people would want anything to do with any of the others, hell why any of these people would get up in the morning and not decide the first item on that day's menu was swallowing a tumbler of aresenic with their Cheerios, is never addressed. Their every action is inexplicable, and they only grow exponentially more so as the inexplicable actions upon inexplicable actions pile up.

And yet... yet. It's all so stupefyingly disconnected from any actual human experience it almost maybe sort of spins back around on itself. If Rainer Werner Fassbinder had been hired to remake Jaws (not make, but specifically re-make) I could see something like this happening. It's entirely possible this thing is clasping "meta" between its thighs and giving it a fierce noogie.

There are so many films like Catfish Catastrophe is the thing, about a group of hateful teenagers played by actors too old to be playing teenagers who are completely incapable of convincing us that they like each other or even met each other more than five hours before the camera was turned on, where this group is then rounded up into a ridiculous situation where they should just run the hell out of there but don't, for ridiculous reasons that never make much sense at all, and are then picked off for inexplicably laid out reasons that are ultimately totally frivolous. I've seen oh let's just say dozens of these movies. And Catfish Catastrophe just takes it all so far that I'm willing to entertain the idea that that's its point.

It just plays it so straight-faced, its absurdity, that it's sort of impossible to tell. I could just be full of shit right now and Larry Fessenden could've just made a terrible, shrill, tone-deaf movie, and maybe my reading too much into it is my own film-school silliness taking hold of my better senses. It is, after all, a movie with a giant fucking catfish eating people. (OR IS IT?) (Yes, it is.)
.
Who? Jason Adams When? 3:37 PM
Labels: horror, reviews