Sorting Out The Spooks 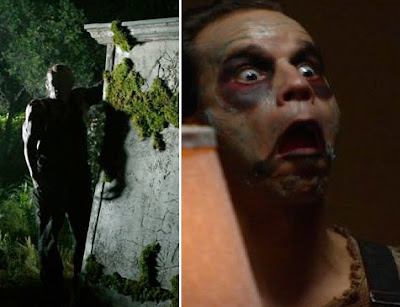 While I find the news heartening that AMC Theaters is replacing all their license plates with F U MPAA and releasing Adam Green's Hatchet sequel unrated into their theaters on October 1st, this can't help but stir up other more mixed feelings.

Namely, that Hatchet came out right around the same time that Behind the Mask: The Rise of Leslie Vernon came out, and I much preferred the latter (although Hatchet has its pleasures to be sure) and want a sequel following Leslie (mmm Nathan Baesel) much more than I do another movie with Victor Crowley. Alas, there hasn't been word on a Vernon sequel for ages. Sigh. Sadness.

Okay, sadness over! There are so many horror movies coming out this October, right? So glad that Saw's reign-of-terrible is finally ending and the month's made room for other horror movies. And yes we do have Paranormal Activity to thank for that. Even if you didn't like PA as much as I did, you oughta give thanks.
.
Who? Jason Adams When? 12:38 PM

Behind the Mask was much more successful for me than Hatchet. Will I still see Hatchet 2? You bet your Adam Green loving ass I will!